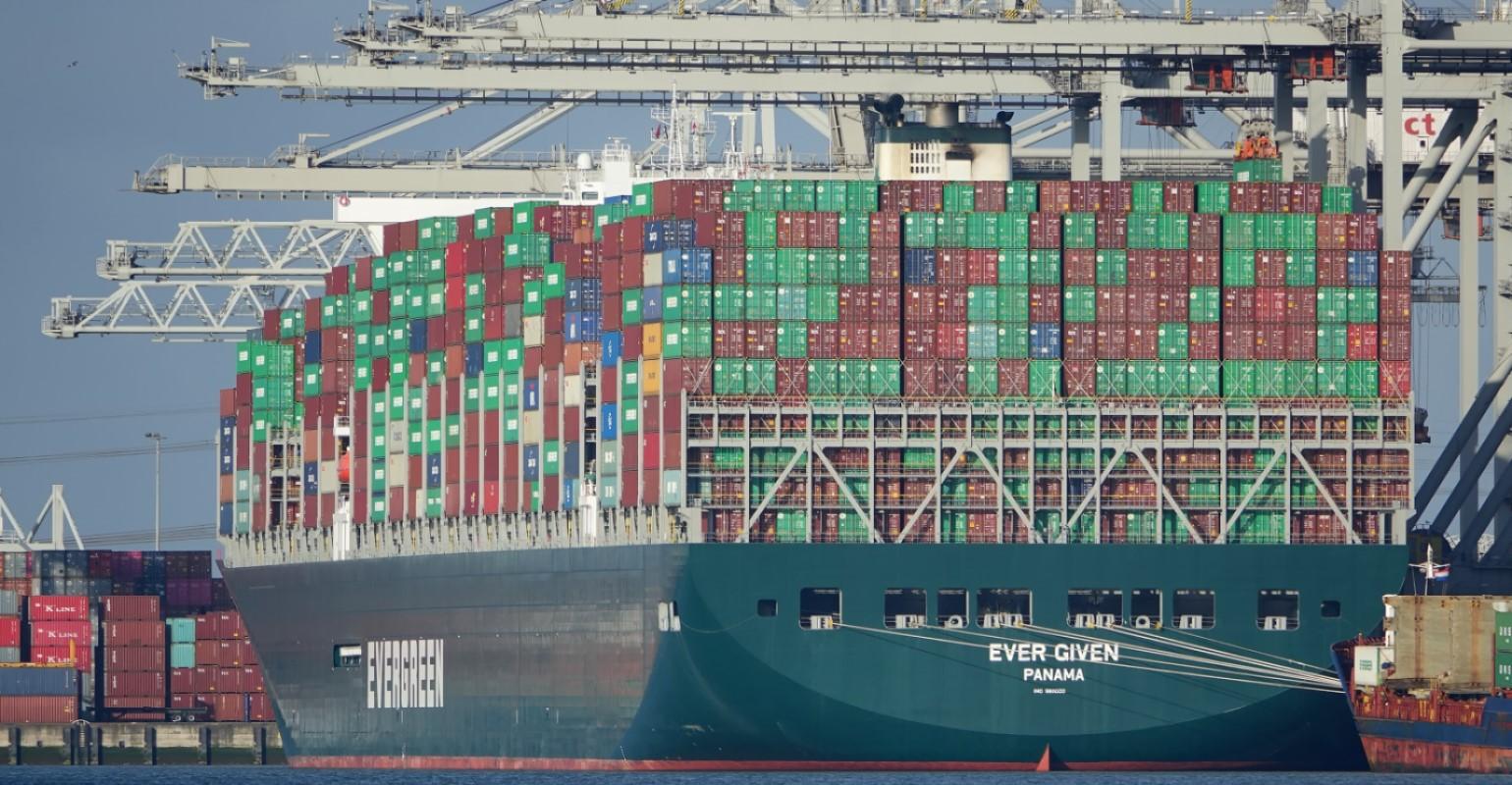 Eveer Given at Rotterdam in March 2020
The Suez Canal has been blocked by a grounded container ship, with no progress made to free it and no indication of when transits will resume.

UPDATE: A statement from GAC at 1200 local time said: "According to information from the Suez Canal Authority, the grounded vessel has been partially refloated and is now alongside the Canal bank. Convoys and traffic are expected to resume as soon as vessel is towed to another position."

The Suez Canal has been blocked by a grounded container ship, with growing queues of ships either end of the busy waterway. The Suez Canal is a critical piece of the world's trade infrastructure and its blockage will likely have significant impacts on ocean trade.

The stuck vessel is Evergreen’s 400 metre-long Ever Given, a 20,000 teu ship built at Imabari in 2018. “All crew are safe and accounted for. There have been no reports of injuries, pollution or cargo damage and initial investigations rule out any mechanical or engine failure as a cause of the grounding,” manager Bernhard Schulte Shipmanagement (BSM), said in a statement.

The ship became wedged across the canal on Tuesday on a northbound transit. Evergreen told press that it suspected a gust of wind had hit the vessel, knocking it off course and causing it to run aground.

Pictures show digging equipment clearing sand from the area around the bow of the ship as part of efforts to release the ship.

Gulf Agency Company (GAC) said in a statement "Suez Canal tugs have been working to free the 400 metre LOA laden vessel but wind conditions and its size of are hindering the operation. So far, no progress has been made... there is currently no indication of when the Canal will be clear and transits will be able to resume."

It is possible that the plight of the Ever Given is not unconnected to the recent spate of containers being lost overboard in high winds – namely that disruption of liner schedules and cargo backlogs following the pandemic means that mega- and ultra-sized boxships are now sailing full, with containers stacked high to their very limit. As Seatrade Maritime Review’s liner editor Jim Hanscom explained in his column in the latest issue of the magazine, this can be a recipe for disaster

Hanscom cites a recent report by P&I insurer The Standard Club, which states that “when fully loaded, the deck stacks present additional windage areas, which combined with large freeboards, act like a giant sail to amplify a ship’s motions as the weather deteriorates.”

Shippers will be armed with port congestion data in negotiations
Mar 23, 2021