How many containers will we lose this year? 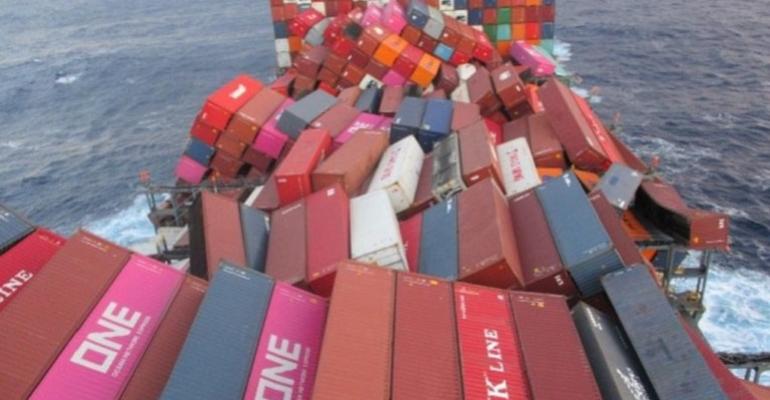 As we once again make our way towards winter in the North Pacific, should we be bracing ourselves for another season of container losses or have we, as an industry, started to learn some lessons?

There are many theories surrounding the reasons for increased losses in containers, ranging from increased severity of weather caused by climate change, larger vessels that are loaded beyond the cargo securing manuals, and poor passage planning or decision making when approaching bad weather amongst them.

Whilst all of these factors may play a part, my view is that no container loss incident can be assigned a single cause. Just like any disaster, it is a combination of factors that lead up to an event that could have been avoided. The fact that we don’t see more incidents of large container losses is, quite frankly, probably just down to luck.

For years, shipping lines have had a seemingly insatiable demand for ever larger vessels. In 1997, the largest container ships that were sailing on the Asia-Europe trades were panamax-sized vessels (pre-Panama Canal expansion) and so were limited to a nominal teu intake of approximately 4,400 teu.

Maersk Line was the first to take the decision that vessels operating on the Asia-Europe trades did not have to fit through the Panama Canal and so the only limiting factor in vessel size became the capabilities of the terminals and their cranes. Nowadays a 4,400 teu ship would be considered a feeder vessel and the mainline vessels are topping 24,000 teu (nominal capacity).

After all, you can’t just keep adding capacity to one trade without removing some. We are already moving back to a position of supply outstripping demand, and this is only going to get worse as the ship-building spending spree of the COVID profit bonanza starts to come online in 2023.

Relatively speaking, the Asia/Europe trades have fairly modest weather conditions. This is a group of trades whose primary financial objective is to connect cargo from the manufacturing hubs in Asia to the consumer markets of the west and with the more profitable North/South trades. Shipping lines know that they need to maximise the cargo intake on every sailing, so they push them to the limits.

Whilst this is generally achieved without incident, it sets a potentially dangerous precedent for how much cargo can be loaded onto a particular vessel. There is a constant push to increase the vessel intake as close to the nominal TEU as is practically possible.

As a vessel class is marked for cascading over to the transpacific trade, this cargo intake expectation doesn’t change. If a vessel can carry 18,000 TEU on one service, why can’t it do the same on another? The vessel hasn’t changed. The cranes are capable of loading and discharging the ship. Why change?

The answer: weather. The North Pacific in the wintertime is a completely different beast when compared to the relative calm of the Indian Ocean, even during monsoon season.

Captains and Chief Engineers typically stay with the same vessel for a number of years. This is logical since it allows them to hone their expertise in how this particular ship behaves. They know the peculiarities and quirks that every ship has. They know how the vessel is going to handle during berthing and unberthing. They know how to get the best performance out of the vessel, but this creates another problem.

Everything they have come to know about the ship is based on one trade. When moving to another trade, the learning process starts again. How does the vessel handle in much rougher weather? How far does the vessel roll? What are the new limits that the vessel can safely operate in?

Whilst the weather conditions may have shifted, the commercial pressures still remain. Staying on schedule and minimising bunker consumption still weigh heavily on the Captain’s mind. Decisions that would have worked on the Asia/Europe trades are now much riskier. How fast do I push the vessel in the current weather conditions? How far do I have to alter course to avoid the developing depression and still maintain the schedule?

Although container losses are relatively small in terms of overall percentage lost vs transported annually, the fact that we now have much larger vessels on trades that are highly prone to extreme weather creates a real problem. Even a “small” loss of containers on a 14,000 teu vessel represents a much higher number of containers than just a few years ago. In some cases, we can be talking about the loss and/or damage of several thousand containers.

Maybe it’s time we stopped pinning the blame purely on the vessel and started looking at the fundamental problems the industry has created for itself?