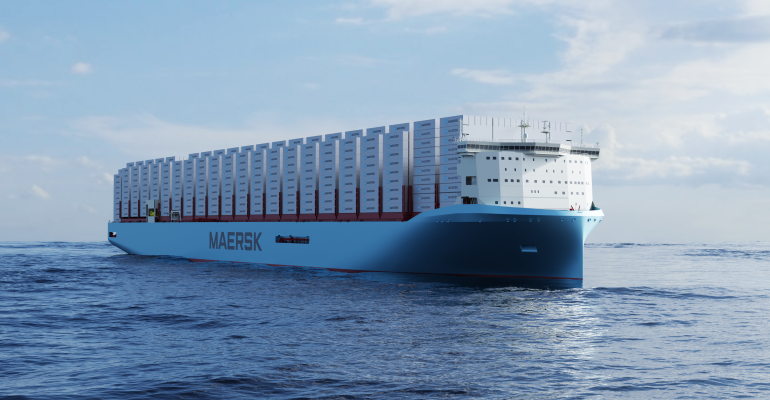 The latest order brings Maersk’s total orderbook of dual-fuel vessels capable of running on methanol to 19. Maersk said the new 17,000 teu ships will replace existing tonnage in its fleet when they’re delivered in 2025.

Maersk said that when all 19 vessels on order join the fleet and replace older tonnage, annual CO2 savings will be around 2.3m tonnes.

The order further cements Maersk’s commitment to methanol as a pathway to zero emissions shipping, following an eight-vessel methanol-fueled 16,000 teu containership order at HHI in 2021. Those vessels are due for delivery from Q1 2024.

Maersk has also signed at least one green methanol fuel supply agreement and joined a partnership to create the first e-methanol plant in Southeast Asia.

Methanol offers a complete decarbonisation pathway to the maritime industry through the use of e-methanol, methanol created using renewable electricity.

“Green methanol is the best scalable green fuel solution for this decade, and we are excited to see several other shipowners choosing this path. It adds further momentum to the rapid scaling of availability needed to bring down the premium on green methanol and accelerate the evolution of climate neutral shipping,” said Palle Laursen, Chief Fleet & Technical Officer at Maersk.

“Benchmarked against conventional fuel capabilities, additional capital expenditure (CAPEX) for the methanol dual-fuel capability is in the range of 8-12%, which is an improvement compared to when Maersk ordered eight vessels with the same technology last year,” said Maersk.

The company said it aims to maintain fleet capacity at a minimum of 4.3m teu.