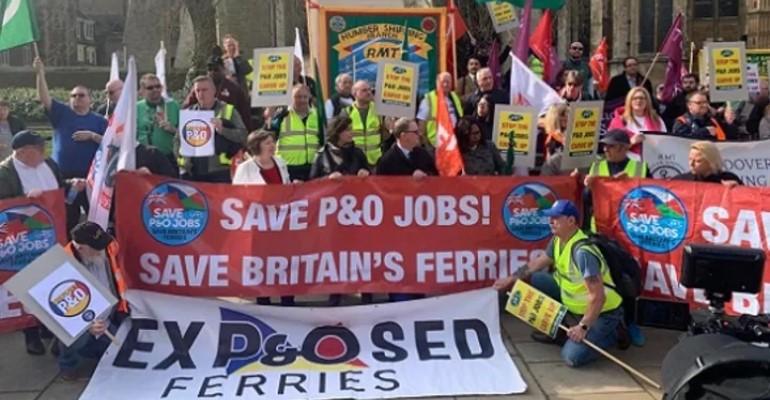 The British Prime Minister told UK parliament that P&O Ferries may have broken the law when it sacked 800 employees last week without notice.

“We condemn the callous behaviour of P&O,” said Johnson. “The company concerned has a duty to notify the government 45 days before taking that sort of action,” said Johnson, who claimed he knew nothing about the plan until it was made public

“If the company is found guilty then they face fines running into millions of pounds, and in addition we will be taking steps to protect all mariners who are working in UK waters and ensure that they are all paid the living wage,” said Johnson.

The UK Living Wage is £9.50 per hour; the RMT union claimed some replacement agency workers on P&O Ferries would be paid as little as £1.81 per hour.

Johnson did say that the government would act to close a loophole in UK employment law which allows seafarers to be paid under minimum wage in the UK’s exclusive economic zone, although leader of the opposition Keir Starmer pointed out that the government said it would review the same legislation two years ago.

There has been widespread speculation in the UK media that P&O Ferries may face legal action over its decision to fire 800 workers and replace them with cheaper agency staff. Johnson has previously said that legal action may include criminal proceedings.

David Ashmore, employment law partner at global law firm Reed Smith, said: “Provided an employer complies with any applicable UK government notification requirement, realistically there would be no criminal liability, however there are punitive financial sanctions for noncompliance with the requirement to notify Trade Unions and consult.

“For UK based staff, it is hard to see how there would be any defence to this if there has been no prior warning at all of the dismissals. In that scenario, realistically the employer would be hit with the full penalty of 90 days’ pay per employee (25% of the annual wage bill),” said Ashmore.

P&O Ferries released a statement on March 22 stating its severance packages were above contractual minimums, were in some cases over £170,000 and totalled around £36.5m, the biggest such payout in the UK marine industry.

Unions representing the sacked seafarers said their members were being blackmailed as full pay-outs hinged on staff signing non-disclosure agreements.

"The way that the package has been structured is pure blackmail and threats– that if staff do not sign up and give away their jobs and their legal right to take the company to an employment tribunal they will receive a fraction of the amount put to them,” said RMT secretary general Mick Lynch.

On the matter of compensation packages, Ashmore said: “The question now is whether the unions/employees will be pushing for a figure that reflects their full rights (e.g. unfair dismissal + notice + punitive award for noncompliance).

“In certain situations, it may cost less for an organisation to pay the penalty costs than to comply with the legal requirements, but recent events have shown that the reputational damage can be very high,” said Ashmore.

In a press release issued on March 23, P&O Ferries CEO Peter Hebblethwaite said: “I want to say sorry to the people affected and their families for the impact it’s had on them, and also to the 2,000 people who still work for P&O and will have been asked a lot of difficult questions about this.

“This was an incredibly difficult situation that we wrestled with but once we knew it was the only way to save the business, we had to act… I wish there was another way and I’m sorry.”