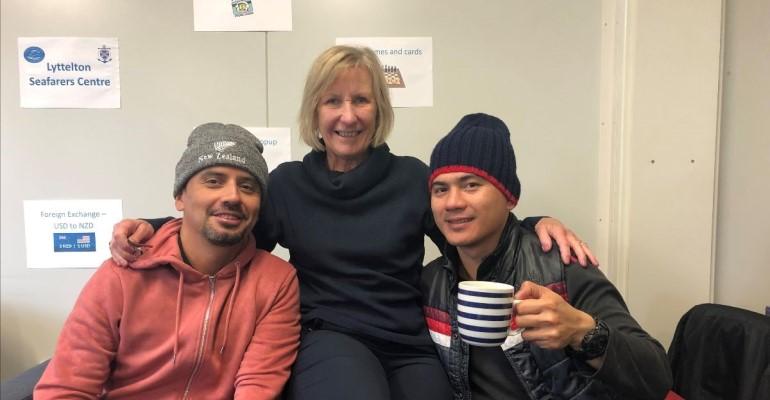 Award-winning fundraiser Jan Webber and seafarers in Lyttelton.
Long careers and exceptional recent efforts in the maritime sector have been recognised with multiple awards in the New Year’s Honours list.

Director of Development at the Mission for Seafarers Jan Webber was awarded the British Empire Medal for services to Women in the International Maritime Sector. The award recognises 16 years of service across positions in the Sailors’ Society and her current role at Mission to Seafarers since 2017.

“I am amazed and deeply touched to have been considered worthy for such an honour,” said Webber. “The shipping industry is a friendly, welcoming, and tight-knit community, and I have been privileged to meet so many people from all over the world. I find a great satisfaction in matching a company’s ESG needs with what the Mission is doing – from our port chaplaincies to our family networks and mental health resources. The partnerships we develop bring benefits to everyone, but especially to the seafarers who rely on our work.”

Mission to Seafarers said Webber has raised close to £14m for its welfare work in 200 ports and 50 countries.

Natalie Shaw, Director, Employment Affairs at the International Chamber of Shipping was awarded a CBE for services to Seafarers during the Covid-19 Pandemic.

Related: HFW extends partnership with the Mission to Seafarers

J & J Denholm chairman and UK Chamber of Shipping President John Denholm was made a Commander of the Order of the British Empire (CBE) for services to the Maritime Sector and Charities.

British Ports Association CEO Richard Ballantyne was recognised with a CBE for services to the maritime sector. Mr Ballantyne joined the British Ports Association in 2007 and became the Chief Executive in 2016. He represents the BPA on a number of industry bodies and is a member of a wide range of government stakeholder groups and international committees. He is also a Director of Maritime UK and a trustee of the seafarers charity the Merchant Navy Welfare Board.