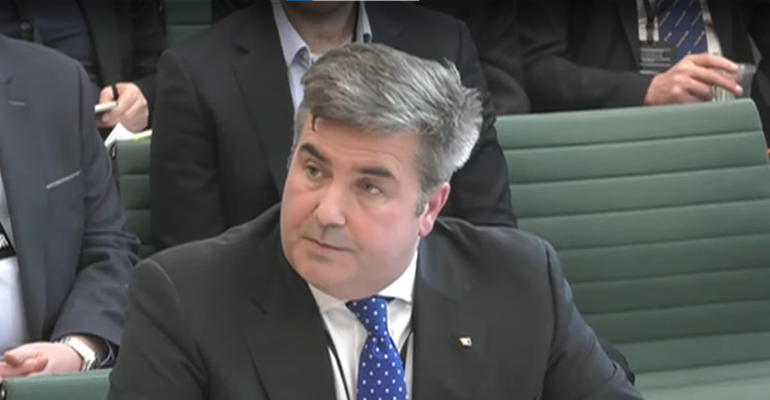 P&O Ferries CEO Peter Hebblethwaite has dropped from a conference panel at the Interferry Conference.

Hebblethwaite’s participation in session entitled “Power and People” at the 46th Interferry Conference in the US attracted attention from politicians and unions alike.

In a letter to Interferry, Chair of the US House Committee on Transportation and Infrastructure, Rep. Peter De Fazio (D), called for Hebblethwaite to be removed as a panellist.

De Fazio said Hebblethwaite’s proposed participation “puts a stain on the reputation of Interferry’s conference. Employers like that have no place at an Interferry conference, let alone one that is co-hosted by the Washington State Ferries and takes place in the United States.”

Hebblethwaite rose to infamy in the UK when P&O Ferries fired some 800 seafarers via a zoom call, with no notice and without consulting the unions. The uproar that ensued saw some P&O Ferries vessels out of service for months. Hebblethwaite was grilled by MPs on the legality of the firm’s cost-cutting decision to sack its staff and replace them with agency workers.

De Fazio said that inviting Hebblethwaite to speak on a Power and People panel was “an insult to all seafarers”.

ITF quoted Interferry CEO Mike Corrigan as saying “Mr. Hebblethwaite is not able to participate at our conference”.​​

David Heindel, Secretary-Treasurer of SIU and chair of the International Transport Workers’ Federation (ITF) Seafarers’ Section, said of Hebblethwaite: “What P&O Ferries did under his instruction was not only immoral, it was illegal.”

“Whether he jumped or was booted off this panel, it doesn’t matter, he has no place sitting among industry leaders, especially at a conference centred on attracting dedicated people to our industry,” said Heindel.

RMT General Secretary Mick Lynch said: "Peter Hebblethwaite should never have been invited to this event and it is to the credit of the international trade union movement, that enough pressure was applied to get him removed from the panel.

"What he and his fellow cronies at P&O Ferries did to 800 seafarers unlawfully was a national disgrace and should never be forgotten. RMT will continue to organise and campaign vigorously to make sure other P&O type mass sackings do not happen in other industries.”

Nautilus International General Secretary Mark Dickinson, whose union represented many of the fired seafarers, said: “As a result of campaigning by unions, Hebbelthwaite has now dropped off the panel. He should also take this opportunity to step down as CEO, and if he fails to do that, we call on the UK Government to ensure he is forced to step down.”

Grappling with the shortage of seafarers
Nov 25, 2022