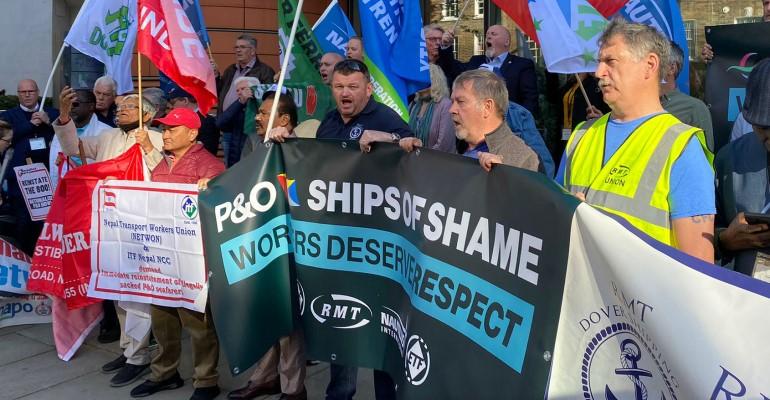 Gathering on April 21, union leaders and members called for P&O Ferries owner DP World to step in and “fix this mess.” P&O Ferries has been under intense pressure from unions, the public and government since it fired 800 of its seafarers without warning by Zoom call in a bid to replace crews with cheaper agency workers.

P&O Ferries had planned to have its vessels back in service on its UK and UK-Europe routes within 10 days of disposing of its crews, but multiple vessels have failed port state inspections, delaying their return to service.

In an update on April 21, the UK Maritime and Coastguard Agency (MCA), which is responsible for port state inspections in the UK, said there were inspections underway on the ferries European Highlander and Norbay, and that particular attention will be paid to emergency procedures on the ships.

The Pride of Hull and European Causeway, which serve the Hull to Rotterdam and Larne to Cairnryan routes, respectively, have both been cleared to sail, while Dover to Calais vessels Spirit of Britain and Pride of Kent remain under detention after failing inspections. Two vessels are yet to have their inspections, making up the total of eight P&O vessels due for inspection before returning to service.

Update: On April 22, MCA said Norbay had been cleared to sail, European Highlander's inspection is ongoing, and Spirit of Britain's reinspection is underway.

At the London rally, union leaders said it was time for parent company DP World to uphold its values.

ITF President and ITF Dockers’ Section chair Paddy Crumlin said: “By allowing its P&O Ferries’ management to sack a unionised workforce en-masse with no consultation, DP World has clearly broken its pledge to uphold ‘freedom of association and the effective recognition of the right to collective bargaining’ of 800 of its employees.”

“This is nothing short of a global governance failure by DP World’s leadership. P&O Ferries’ conduct raised serious questions of DP World’s promise to implement the UNGC’s principles to ‘create a better future for everyone’. There are 800 seafarers right now asking where their better future is.”

Recent developments in the P&O fiasco include ITF inspectors being refused access to the Port of Dover on April 19, and P&O Ferries sacking seven agency staff for returning from shore in breach of alcohol guidelines.