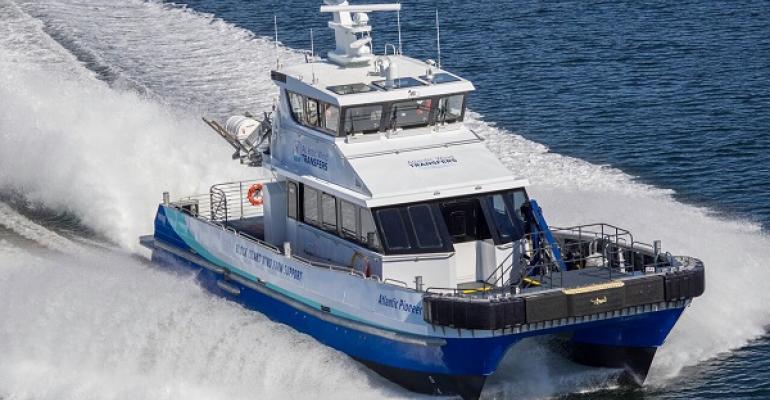 As offshore wind activity increases along the US East Coast, a big ramp-up in port activity is expected; there is already evidence of this at ports in Massachusetts and Rhode Island. With this will come a demand for newbuild heavy lift vessels installation vessels specifically for the wind energy trades.

The Washington, DC office of law firm Blank Rome, in a recent briefing to clients regarding the 2019 Coast Guard Authorization Act (CGAA), now under discussion in Congress, stressed the importance of this Act for the offshore sector. Of particular concern is the availability, or not, of Jones Act qualified installation vessels, as well as cable laying and repair vessels.

So far, actual electricity generated from offshore wind in the East Coast US waters has been small. The “Block Island Wind Farm” project, in waters south of Narragansett, Rhode Island, has been producing 30 mW of (with six turbines) since late 2016. Atlantic Pioneer, a Jones Act compliant 12 passenger crewboat (officially Crew Transport Vessel, or CTV) to ferry workers out to the site was delivered from the Blount yard in Spring, 2016.

In late 2018, Denmark-based Ørsted, one of the leaders in the sector, acquired Deepwater Win- the Block Island project’s developer, from its previous owners private equity investor D.E. Shaw. Deepwater Wind has been a successful bidder in a number of lease auctions sponsored by the Bureau of Ocean Energy Management (BOEM), the same agency which also handles leasing of oil and gas tracts along the U.S. Outer Continental Shelf.

Another small-sized project, rated at 12 mW (two turbines)- where Ørsted is teamed with electric utility Dominion Energy has now led to a set of vessel building contracts- also for CTVs. The first vessel will be built at the US Workboats yard in North Carolina, nearby to the lease area. A second CTV will be built at the Senesco yard in Rhode Island, and will be used in another project- dubbed “Revolution Wind.”

The Blank Rome briefing points out that “Of particular note, the legislation could have an outsized effect on offshore wind in the United States, which is at a nascent stage and requires installation activities of the type contemplated in the 2019 CGAA.” Legislators are not naval architects; the Blank Rome lawyers point out that nuances in just how Congress defines the lifting capacity of an “installation vessel” - presently specified as 1,000 mt and larger, but subject to change as the legislators fine-tune the CGAA language - could greatly impact questions of Jones Act waivers allowing non-US vessels to handle installation. If not, Jones Act compliant newbuilds may be required.

There are multiple mega-projects just over the horizon, where massive turbines will be deployed offshore. Ørsted will be spearheading the largest offshore wind project in North America.

In June, 2019, the Danish provider announced a major victory- gaining a green light from utility regulators in New Jersey to develop “Ocean Wind”- a massive project which will produce 1,100 mW (1.1 gW) of electricity by 2024. The project will be built 15 miles offshore Atlantic City.

Other large projects in the works include a large lease area south of Nantucket Island to be developed by Vineyard Wind - comprising Avangrid Renewables, a US entity tied to Iberdola- the Spanish utility, as well as fund packager Copenhagen Infrastructure Partners. Here, 84 turbines would generate 800 mW.

“Revolution Wind”, mentioned above, is another Ørsted project. Slated to be built on BOEM lease acreage, Rhode Island will be supplied with 400MW, with Connecticut set to receive 200mW of electricity generated from wind power, as this project moves ahead towards early 2023. Plans for Dominion Energy’s project have it reaching to 2,000 mW, or 2.0 gW, in the coming years.