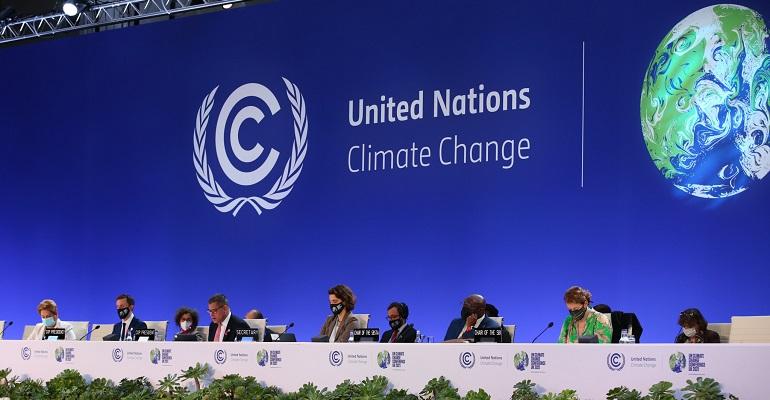 UNFCCC_COP26_8Nov21_Stocktake_KiaraWorth-1
Nineteen countries have signed a declaration to set up “green shipping corridors” between two or more ports.

The Clydebank Declaration was launched at COP26 with 19 states with the aim to set zero-emission maritime routes between two or more ports.

In a Mission Statement the signatories said they aimed to support the setting up of at least six green shipping corridors by the middle of the decade.

“It is our aspiration to see many more corridors in operation by 2030. We will assess these goals by the middle of this decade, with a view to increasing the number of green corridors,” they stated.

The voluntary participation of ship operators is seen as a significant element of success in the green shipping corridors.

Ingrid Irigoyen, Associate Director for Ocean and Climate at The Aspen Institute, commenting on the declaration said: “Establishing zero-carbon shipping corridors is a clear and necessary next step in this transition. We’ll need to align stakeholders across the shipping and fuels value chains in specific geographies, and having this group of governments ready and eager to support those efforts is extremely helpful.”

The Aspen Institute is backing the recently launched coZEV initiative where major cargo interests have pledged to progressively switch their ocean freight to zero carbon fuels by 2040.

Meanwhile the Getting to Zero Coalition a new study ‘The Next  Wave: Green Corridors’ showing it says that developing Green Corridors can cut through this complexity and  accelerate the transition to zero-emission shipping.

“Green corridors will enable us to go from ambition to action. However, there will still be a cost gap between  fossil-based shipping and zero-emission shipping of the order of 25% to 65%. Targeted government action to  close that cost gap on corridors could pay big dividends for the transition overall,” said Faustine Delasalle,  Co-Executive Director, Mission Possible Partnership.