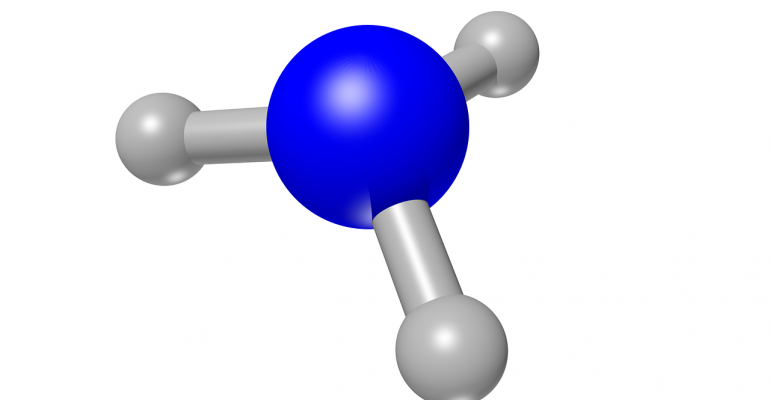 Ammonia NH3 molecule
A mapping of zero emission pilot and demonstration projects being undertaken in the shipping industry shows a major growth in interest in large ammonia-powered vessels.

Mirroring a general increase in interest around green ammonia as potential fuel to decarbonise shipping the Getting to Zero Coalition’s updated Mapping of Zero Emission Pilots and Demonstration Projects showed 10 new large ammonia projects, bringing the total to 14.

The mapping exercise revealed that the total number of projects working on zero emissions fuels and propulsion, as well as bunkering and distribution of fuels, for shipping had increased from 66 to 106. Interest in hydrogen, Power to X, and batteries also remains strong.

“We see an increased specialization in small and large ship technology projects. There is an uptake in hydrogen-based ship technology projects, but particularly in ammonia projects. For fuel production projects, we see a continued trend towards hydrogen-based Power-to-X fuel production,” said Jesse Fahnestock, Project Director at the Global Maritime Forum and lead of the Getting to Zero Coalition’s Motivating First Movers workstream.

“In the last six months, around 10% of the projects have increase in size or ambition or moved from the concept study stage to the demonstration stage. This shows a tangible move towards raising ambition and scaling up existing projects.”

There has also been an increase in Asian based projects from 16 in the first edition of the mapping to 31 in the second.

“The new mapping includes twice as many Asian projects. Based on the timing of the projects that we have uncovered, we judge that there is an increase in activities in Asia. It is also encouraging to see an expansion of new geographies now pursuing zero emission pilot projects,” said Fahnestock.

Europe remains a key territory in the majority of projects with 71 having a significant connection to Europe.

The Getting to Zero Coalition is run by the Global Maritime Forum and aims to help accelerate maritime shipping's decarbonisation with the development and deployment of commercially viable deep sea zero emission vessels by 2030.