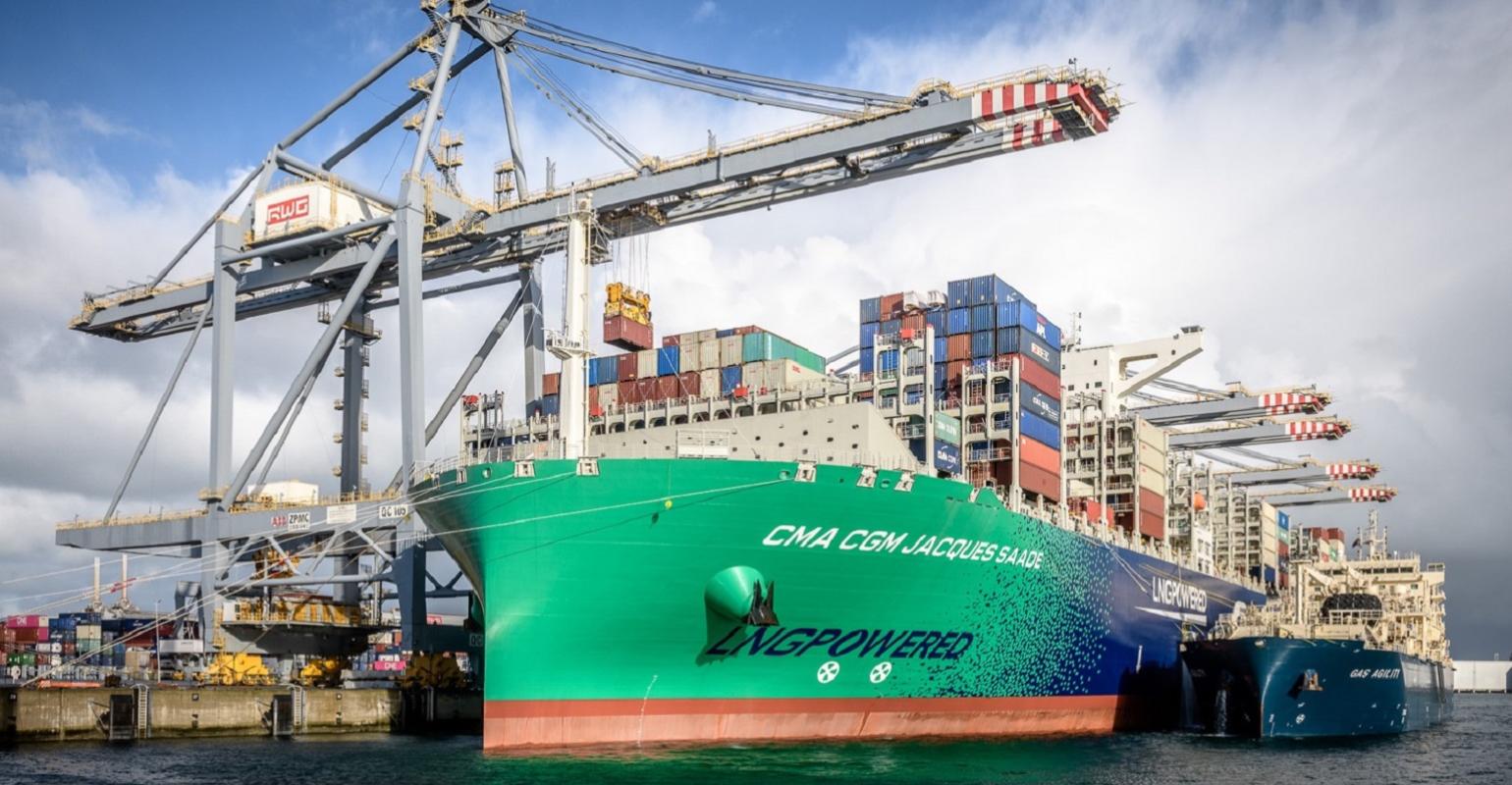 The 23,000 teu, LNG-powered CMA CGM Jacques Saade in the Port of Rotterdam
Adopting LNG as a fuel for shipping will cost more than a transition straight to zero-carbon fuels and will bring a moderate but uncertain reduction in greenhouse gas emissions, even in ideal circumstances, according to a World Bank report.

The World Bank report “The Role of LNG in the Transition Toward Low- and Zero-Carbon Shipping” comapares a future scenario where LNG is adopted as a transitional fuel before adoption of zero carbon fuels to one where the industry moves straight to zero carbon fuels.

Zero carbon propulsion solutions appropriate for most of the world's fleet do not yet exist and producing the appropriate fuel will require large scale development of hydrogen production facilities and masses of renewable energy. The necessary technologies exist and are being developed, but marketable solutions are not expected until around 2030.

The report suggests that efforts to decarbonise in the meantime through the use of LNG could incur much larger costs for little or no reduction in emissions.

“This report… estimates—under idealized conditions—only a moderate, but still uncertain GHG reduction benefit at best. Additionally, it forecasts the need for significant additional capital expenditures to achieve a two-stage conversion (oil to LNG, followed by LNG to zero-carbon) as opposed to a single-stage conversion (oil to zero-carbon only), with the latter implying a limited role for LNG,” said the report.

The assessment for LNG as a fuel considers its reduced carbon emissions when burned compare to oil-based fuels, but calls any overall reduction “theoretical” due to LNG being essentially liquefied methane, a very strong greenhouse gas in its own right. “Therefore, any GHG emissions from unburnt methane released to the atmosphere—called methane leakage or methane slip—can diminish or even entirely offset the theoretical GHG benefit of the use of LNG,” said the report.

Those costs are over and above the estimated $1.0-1.9 trln investment needed to decarbonise shipping.

LNG’s temporary role could bring a peak of 40% of the bunker market in energy terms, said the report, but “depending on the methane leakage assumptions used, this market penetration in 2030 would result in either a peak GHG benefit of eight percent, or a peak disbenefit of nine percent…  That is to say, it remains unclear whether GHG emissions would actually be higher or lower if the industry continued using heavy fuel oil before zero-carbon bunker fuels are scaled up from 2030.”

Operation of LNG vessels may also prove difficult over the long term, should the reports temporary LNG scenario play out, as LNG demand peaks in 2030 and drops sharply from there “in a timeframe shorter than the economic life of these assets”. This could result in the use of LNG for longer than in a straight to zero-carbon scenario.

The report said that its review of the literature found no clear, unambiguous driver for the large-scale uptake of LNG.

The current ship's Energy Efficiency Design Index (EEDI) only takes into account CO2 emissions from burning the fuel onboard, missing upstream and midstream emissions. The focus on CO2 also overlooks methane emissions in the LNG supply chain and onboard, an area which needs urgent and strong policy action, said the report.

"The uncertainties surrounding the GHG benefits of LNG suggest that new public policy support for LNG as a bunker fuel should be avoided... The report also presents a strong recommendation to focus public support on the development of policy that effectively accelerates the research, development, and deployment of zero-carbon bunker fuels,” said the report.

One role found for LNG in shipping’s future was as a feedstock for blue hydrogen for fuels while production of fully green hydrogen scales up.

In the report “The Potential of Zero-Carbon Bunker Fuels in Developing Countires”, Green ammonia was the frontrunner fuel for decarbonising shipping, closely followed by green hydrogen. Green refers to the fuel being generated by electrolysis of water powered by renewable energy. The fuels were selected for their low lifecycle GHG emissions, scalability, economic viability and other factors.