Facing reality on current availability of green fuels for shipping 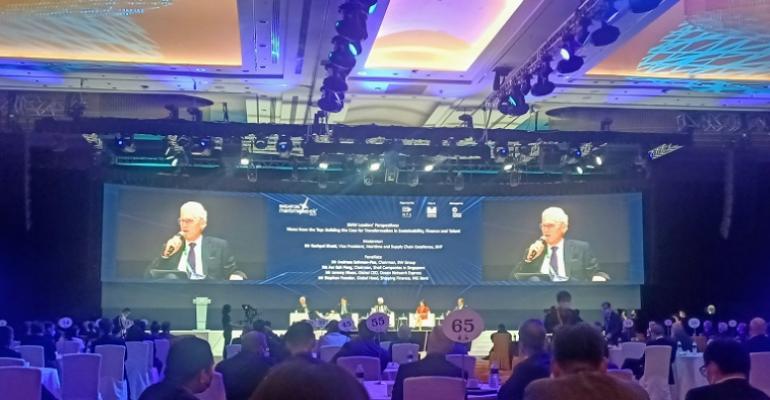 As shipping sets aspirational goals for zero carbon emissions it needs to understand the realities today in terms of the availability of green fuels in making that transition, say leading shipowners.

Speaking at the Singapore Maritime Week Leaders Perspective Andreas Sohmen-Pao, Chairman of BW Group, said “I think what we've done really well over the last couple of years is aspirations.”

“Aspirations are so important in setting the direction of where we want to go. But you cannot solve the problem if you don't know, or are unwilling to face, what the reality is.”

Related: Containerised LNG – a new option for retrofits and newbuildings

That reality is the lack of availability of green fuels today, a point that had also been made Jeremy Nixon, CEO of Ocean Network Express. “The reality right now in terms of real green fuel as in methanol, green hydrogen and ammonia, that there isn't enough of that available at scale,” he said.

Expanding on what this reality currently is Sohmen-Pao said that it requires four times the capex to develop wind versus natural gas, and four to five times the quantities of minerals and materials to produce solar photovoltaic cells as compared to gas. While politicians say that solar and wind are cheaper forms of energy than anything else, this was “only true if you don’t want them 24 hours a day.”

Related: WinGD engines to run on methanol and ammonia by 2024/25

“So, we're in this sort of state of complacency wanting to switch off building ships with traditional fuels, well, then goods won't flow around the world because there isn't enough ammonia, hydrogen, and biofuels,” Sohmen-Pao said.

Explaining the scale of the task at hand for shipping Nixon explained that with 100,000 vessels on the water with an average lifespan of 25 years, it would require 4% of the fleet a year to be replaced with newbuildings capable of using green fuels. “So that's 4,000 vessels a year to come out the shipyards on a continuous sustainable basis for the next 25 years. So that means ordering, manufacturing and delivery and having the green feel ready,” he said.

With very limited options in terms of green fuels today what should a shipowner do when it comes to ordering a newbuilding?

Speaking to Seatrade Maritime News Sohmen-Pao, said, “I think it's different sector by sector, and ideally, you do one where you have optionality to move in new directions later.” For different owners the answer would different depending on which trade they are in, what they could afford, and the urgency to buy a new ship.

Expanding on the theme of realism he added that the industry should not be resistant to people taking different paths as a “binary approach” of it, “has to be this, but not that”, would not move things forward. For BW’s own fleet it is taking this mixed approach with LNG on a small number of ships, as well as looking at new fuel pathways. “We're actually trying to be quite restrained about ordering new ships until there's further clarity, but is a real mix,” Sohmen-Pao explained.

Nixon said there were four options. Firstly, to simply do nothing. Second if vessels are carrying a fuel type as a cargo it can be used as boil-off for the engines as is done with LNG carriers. Third is to use LNG as fuel but greenhouse gas savings are estimated to only be between 10 – 25%. “So therefore, you need to be reasonably confident that that's what can be converted over to burn green LNG,” he said.

The fourth option is to design the ship so that it be converted or retrofitted to run methanol, ammonia or hydrogen in future.

Stephen Fewster, Global Head of Shipping Finance for ING, suggested the approach to ship design needs to change with vessels built to a more modular designs where components such as engines can be swapped more easily. He said a financing model could be built around financing ship’s hulls and engines separately much as is done in aviation for the airframe and engines.

“Why can't we get to the point where like we build a ship today with conventional engines, which can easily be swapped out in three-or-four-years-time and can be financed separately. Why do we feel that we can't do that today? And it's simply because we don't design ships to achieve that,” Fewster said.