IMO in the spotlight at first post-COP26 MEPC meeting 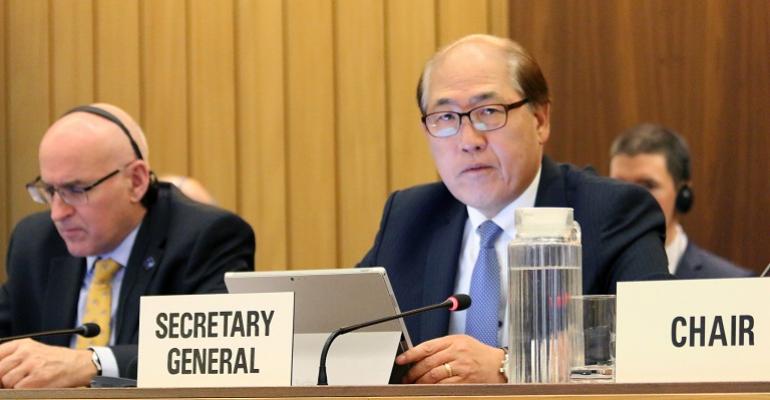 Kitack Lim at MEPC 73
As the IMO opens its virtual doors to MEPC 77 in London today, one key question is whether the $5bn R&D fund will get the go-ahead this week.

Leading industry figures have stressed the importance of the fund which could assist some 260 projects waiting to go ahead, according to Valentina Keys, Senior Associate, Environment and Sustainability at London law firm, WFW.

Speaking for shipowners, Darr was emphatic. “There are zero of the net-zero fuels available at scale today and we’re talking about a five-year timeframe here to get something going.”

There are now 175 IMO members, Darr pointed out, requesting that Governments should get over their political differences and help the industry solve a real practical [fuel] problem. “Us, as the shipowners, we want to get there, work with us and help us do it. One way to do that is help us set a global carbon pricing mechanism and implement that through a workable market-based mechanism.”

Earlier in the webinar, Darr had stressed the importance of continuing research into all possible future fuels. The equipment is not the main issue, he said, because ships can already be built to run on different fuels, such as methanol, bio- or synthetic LNG.

“But actually having those alternative fuels – whether it’s green methanol, synthetic or bioLNG, green ammonia or green hydrogen, that’s going to be where the real challenge is …” he said. “… not only developing the fuels and bringing them to the marketplace and for shipping to be able to compete for those. If we think they’re good energy-carrier ideas, there’s going to be a lot of other energy users out there that are going to need them.

“That part upstream I think is really important – from production to actual delivery to where the ships are,” he continued. “It really needs a lot of help from governments to get there … but remove the political obstacles between themselves that really have nothing to do with an R&D fund, and agree to set up the infrastructure and let shipowners begin funding it,” he said.

“We’re already working on a wide range of fuels, but they won’t be at the scale to solve the problem for the whole industry if they’re not done on a broader scale than company by company. So, we really do need to pool our efforts and our resources here.”