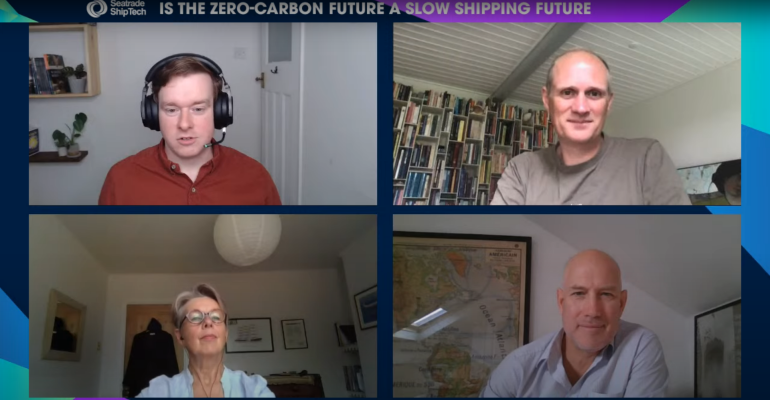 Government support for innovative low-carbon propulsion technology is needed to help unlock the shipping industry’s desire to decarbonise, according to a panel of experts.

Speaking at ShipTech Virtual Is the Zero-Carbon Future a Slow Shipping Future? as part of the Maritime Online Series, Diane Gilpin, CEO & Founder of Smart Green Shipping said action was needed to prevent innovations from being lost.

Gilping recalled that early, small, land-based wind turbines received domestic UK government support in the form of renewable obligation certificates which supported the sector through a period where it would otherwise have made little commercial sense for financial investors to come on board. “That enabled was for the pioneering developers to overcome what is known as the valley of death, where innovations go to die,” said Gilpin.

“What we see now is fleets of offshore wind turbines that are producing electricity at a lower cost than any other form of power production. So that's what we need to be seeing and shipping. And there isn't any mechanism like that,” said Gilpin.

Nicholas Brown, Brand and Communications Director at Bureau Veritas Marine & Offshore said that governments key role to play in working with the industry though fora like the The Coalition for the Energy of the Future which recently announced a feasibility study into a biomethane plant at Marseille-Fos.

“And that's where I think they've got local regulatory, and government involvement with industry to try and come up with solutions. I think government has a role to play and they've got to find out what the right way to interact effectively with the private sector. Shipping seems to be low down the priority list in most places, outside of really shipping-focused areas like, like Singapore… In Europe, for example, I think there's still not enough understanding as the importance and role that shipping can play in helping decarbonize transportation into the future,” said Brown.

ZeroNorth CEO Søren Christian Meyer stressed that in his experience, the shipping industry was engaged with decarbonisation.

“The shipping industry in itself is taking this very seriously, and largely initiatives and coalitions are being formed and coming out of shipping. I really see an industry that on a wider level sees the need for change and is really investing in decarbonisation by 2030 and 2050,” said Meyer. ZeroNorth had seen the attitude in some companies towards reducing CO2 emissions and optimising performance change within the past year.

Gilpin endorsed Meyer’s point, adding that “every individual that I've ever spoken to in shipping wants to do something. What I'm saying is that we need government support to enable us to do it faster. That's really the point. There's no criticism at all about anybody that I've ever met, we really want to do something, but unlike the renewable power domestic industry, where there was a pathway of incentives to decarbonize, there is not that as yet in shipping.”

While the shipping industry may agree with the global shift towards reducing carbon intensity in industry, current market forces still influence operational decisions that will have an environmental impact.

“Speed is a core element of optimizing, and that's where you do have the biggest potential for savings. When you have an industry like the dry bulk sector that has really had very high earnings in this part of the year, one thing that is certain is that they are not slowing down because of the environment, they will follow the dollar. Shipping is a very dollar-driven business, and they will take decisions based on how much money they can make, which is business right? We need to make sure that the future emission savings goes hand in hand with the US dollar. I think that this combination that we need to look at, in order for us to have an impact,” said Meyer.

Answering the titular question of the session, Meyer said he did not think a zero carbon shipping industry would be slower, but instead would have all stakeholders along the supply chain aligned and incentivised to minimise emissions and increase efficiency. A future with zero carbon fuels would also disrupt the market forces informing speed decisions depending on price, he added.

For Brown, there were many broader societal changes that could impact the shape of the shipping industry of the future.

“You see movements like slow food, slow wear - I think as people are fighting back against fast consumerism, this question of incentives is going to be vital,” said Brown.

“I think the question of what the appropriate speed is for a ship is just one factor in in that equation. You can see that proponent, for example, of fourth-generation atomic power setting the idea that ships could go at that 30+ knots, and that might be a more efficient use of the assets as you get more cargo carried faster. So, I think that we'll come back to those incentives, what is the financial imperative?”

Could atomic power be the solution to shipping' decarbonisation conundrum? Listen to a recent episode of the Maritime Podcast in conversation with Mikal Boe, CEO of Core-Power

Gilpin agreed that market forces will dictate the shape and speed of the industry in the future, and saw the that process had already begun with work like her own on wind-assisted propulsion and ZeroNorth’s work on optimisation.

“This programme of decarbonisation means we start today, and learning from that process enables us to build out new solutions and new technologies. If we’re thinking about slow steaming, we need to think about what shipping is about what's the purpose of shipping. Shipping is a facilitator of global trade, so what's global trade going to do in the face of the climate emergency? I think that's a huge unknown,” said Gilpin.

“We're seeing all sorts of aberrations in the way that shipping is working at the moment globally. So I think there's a whole systemic piece that we need to be bearing in mind that as we move into an energy-constrained future, we may be seeing more products made close to shore… what are the implications for shipping there? We might be seeing different trade patterns; we might not be consuming quite so many finished goods.

“It is without doubt that we are in the midst of a climate emergency. It is a business proposition, we do need to be thinking about how we make money in responding to these situations, but we do need to act quickly. I think we need to be doing something in the short term, which could be slow steaming whilst thinking about the long term and holding that long term focus simultaneously,” said Gilpin.