Positive COP26 shipping outcomes, can the IMO step up next week? 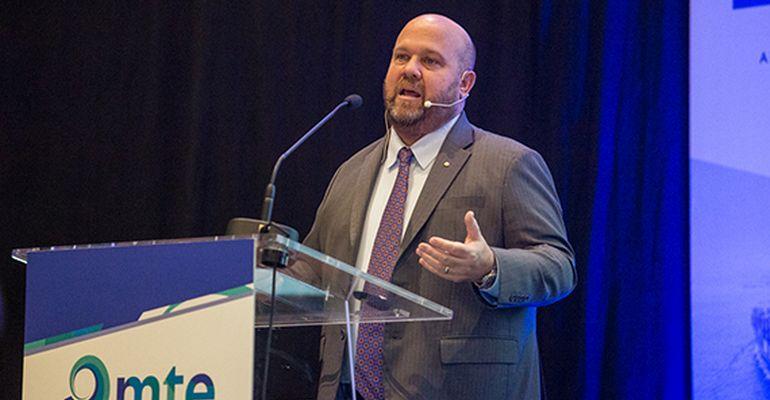 MSC's executive vice president Bud Darr
Although there were inevitable disappointments over the Glasgow Climate Pact following two weeks of intensive negotiations at COP26, global shipping came out of the meeting in a positive light.

This was broadly the conclusion of panellists in a Watson Farley & Williams webinar yesterday, moderated by Lindsey Keeble, Global Maritime Sector Head at the London-headquartered law firm. The event took place just five days before the IMO’s MEPC 77 meeting, which convenes remotely next week.

Bud Darr, EVP Maritime Policy and Government Affairs at MSC Group, listed the three key disappointments as ‘phasing down’, rather than ‘phasing out’ the use of coal, the lack of clarity on a commitment to eliminate ‘inefficient subsidies’ of fossil fuels, and inadequate support by rich countries in the provision of financial assistance at sufficient scale for developing countries.

However, Darr said, outcomes were positive, with more assertive commitments both from shipowning and industry groups. These included a drive to introduce a market-based measure on carbon pricing, already proposed to the IMO by the International Chamber of Shipping, and a proposal to exceed substantially IMO’s existing ambitions and achieve net-zero by the middle of the century.

Darr called for an immediate go-ahead on the proposed $5bn R&D fund which, he said, shipowners had already said they would support financially. The IMO should ‘step aside’, get over the political differences and let shipping get on with it, he declared. “Let us pay!”

Michael Parker, Chairman of Citi’s Global Shipping, Logistics and Offshore business, noted that shipping was the only sector where anything significant was announced on COP26’s Transport Day. He questioned whether it was appropriate for shipping to be lumped together with aviation. One was an essential conduit for the economic and industrial operation of the planet; the other was a people business driven by individual choice.

Stressing that the word ‘decarbonisation’ is inadequate for the comprehensive greenhouse gas (GHG) cutting process that is required, he stressed the importance of accurate lifecycle, well-to-wake, emissions monitoring. He then set out what he described as the four legs that support shipping’s emission reducing initiatives – the Poseidon Principles (financiers), the Sea Cargo Charter (charterers), COSEV (Cargo Owners for Zero Emission Vessels) including heavyweights such as Amazon and IKEA, and insurers, without which ships cannot be either financed or classed.

Of these, he said, COSEV is perhaps the most important. Consumers are watching and know a lot more about global supply chains than they used to. “They know about the importance of the white van outside the front door,” he observed.

WFW’s Valentina Keys, Senior Associate, Environment and Sustainability, emphasised the need for shipping to be more visible. There are other important bodies besides the IMO, she said, including the European Union which is ramping up the pace of change with its planned Emissions Trading Scheme (ETS). Despite opposition from various groups, including some shipowners and other trading partners, ETS could start to impact shipping from 2022. She stressed again the importance of the R&D Fund with more than 200 research projects awaiting funding.

However, she expressed disappointment about wording in one Annex of the Clydebank Declaration, an initiative led by the UK Department of Transport and signed by 19 countries to establish ‘green corridors’ on certain routes, decarbonised from end to end, both at sea and on land. The wording was not binding as it did not set out that all ships on these routes would have to be zero-emission vessels in the future.

Green Corridors will take some time to establish, it was agreed, and many routes will need existing vessels, as well as new ones, for some time.