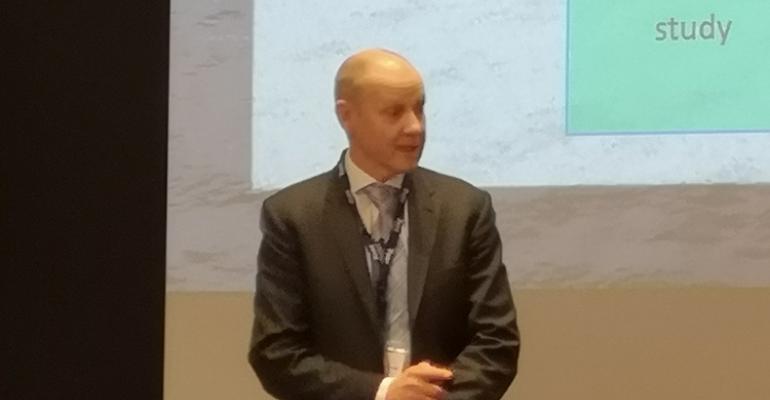 “We’ve agreed to do it, but we don’t have the recipe on the mechanics, the measures or the technologies,” declared Sveinung Oftedal, chairman of the IMO’s Subcommittee on Pollution Prevention and Response, as he addressed delegates attending the 10th Chemical & Product Tanker Conference in London earlier this week.

His frank admission came as he assessed the formidable challenges associated with meeting IMO’s carbon reduction aims, first by 2030 and then by 2050.

These will be discussed at the Marine Environment Protection Committee’s (MEPC) next meeting in May. The dates are those set by the IMO by which time it hopes that its carbon-reducing ambitions will be realised – 40% by 2030 and at least 50% by 2050 compared with 2008 levels.

But there is a very long way to go to prepare “the recipe”. A methodology for calculating the volume of carbon emissions from ships in 2008 is still being debated and this forms the very basis of the future reduction targets. There are also question marks around the composition of the indices – energy efficiency design index (EEDI) and Energy Efficiency Operational Index (EEOI) – and how to calculate and verify a 5% improvement in fuel consumption, for example, when ships operate in many different conditions including speed, draught, weather and degree of hull fouling, to name but a few.

Oftedal, who is also Specialist Director at the Department for Marine Management and Pollution Control at the Norwegian Ministry of Climate and Environment, revealed that the MEPC will consider a mix of mandatory and voluntary measures proposed by member states when it meets in May, This is a key stage of the IMO’s “initial strategy” which has been developed for the five-year period between 2018 and 2023 when essential building blocks are being put in place for the 2030 and 2050 watersheds. These will include short-, mid- and long-term measures.

According to Jasper Faber, manager of transport at research consultancy CE Delft and one of the authors of the IMO’s Third Greenhouse Gas Study 2014, four proposals are already up for discussion at the May meeting. Denmark will propose a goal-based measure in which a ship’s EEOI or Annual Efficiency Ratio would have to achieve a certain reduction when compared with the EEDI reference point. Any efficiency improving measures could be used.

Japan will also propose a goal-based improvement for existing ships based on design efficiency from the maximum continuous rated power versus speed curve. This approach would involve limiting engine power, although this could be manually overridden by ships’ masters in heavy weather, for example.

The Clean Shipping Coalition, an environmental organisation, will propose limits on ship speeds calculated on the basis of an annual average speed which should not exceed a limit based on 2015 annual averages for specific ship types. France will also propose speed limits based on fuel collection data: ships would not be allowed to burn more fuel annually compared with 2019.

Three of these four proposals involve speed reductions – moves that effectively reduce the world fleet’s carrying capacity and, on the face of it, would imply that more ships will need to be built, generating large volumes of additional carbon creation. However, others point out that the power-speed curve is a roughly cubic relationship, so slower ships use disproportionately less fuel.

As one observer commented at the conference: “If you thought 2020 was complicated, try greenhouse gas!”