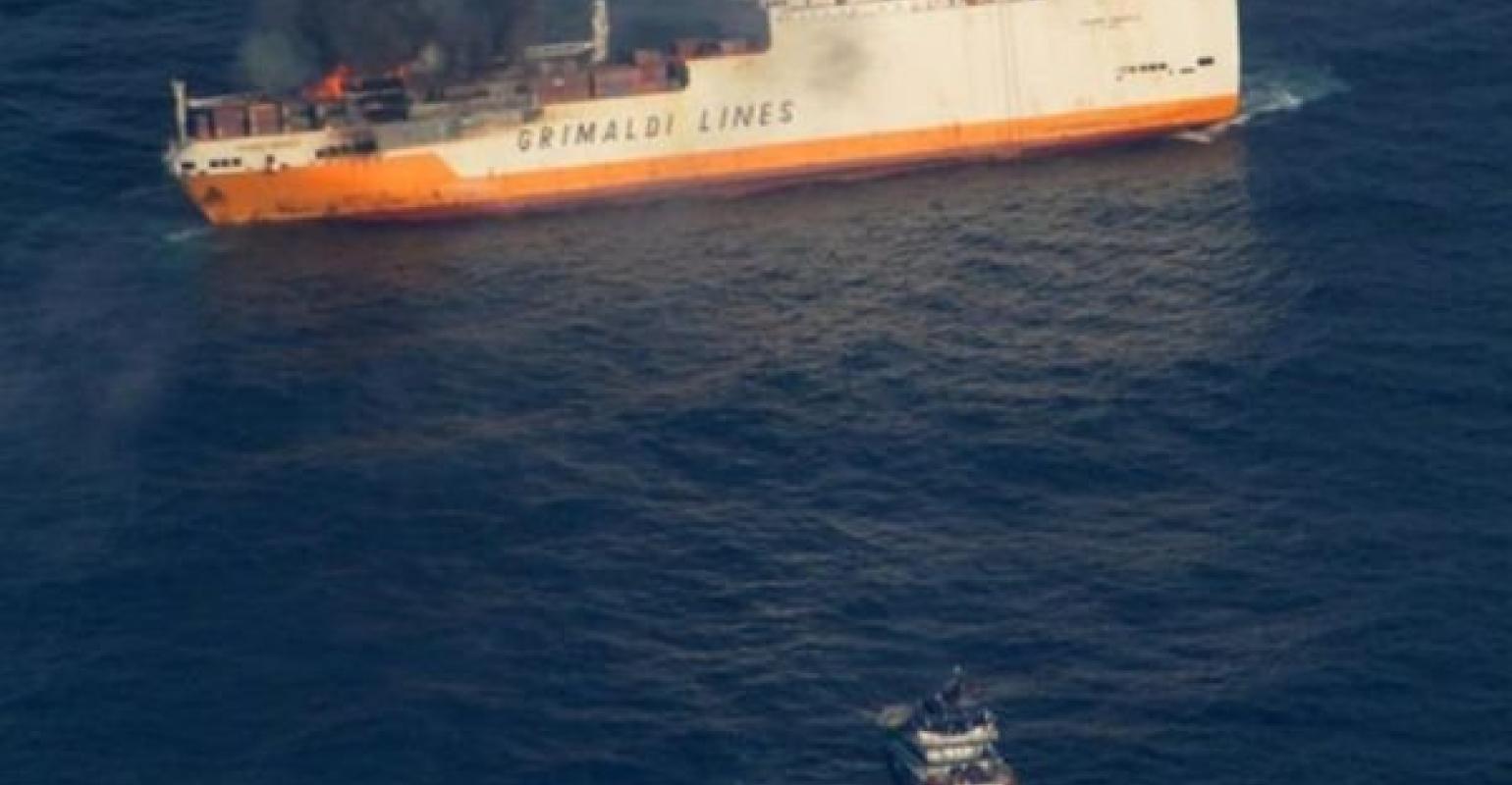 To the melancholy list of lives and ships lost and damaged by burning and exploding containers we can now add the 56,642 gross tonnes of Grimaldi’s Grande America, now settling into the mud of the deepest part of the Bay of Biscay.

With no little skill, the crew of 27 managed to get their boat launched from its lofty perch on top of the ro-ro garage of the wildly rolling and burning vessel. The work of the crew of HMS Argyll in shepherding the lifeboat and getting its occupants safe aboard the warship in the heavy sea was doubly commendable.

It is worth checking out the video of the rescue to get some idea of the magnitude of the fire and the difficulties of life-saving in such a situation. It is clear that the Master’s decision to get off the burning ship was absolutely correct, and there can be no argument that a lot of seamanship and courage saved 27 lives that night.

It is understood that the fire originated in a container on the foredeck of the con-ro ship, but also that its spread was rapid and deadly, fanned by the fierce wind. By the time that the warship was on the scene, virtually the whole foredeck was afire. It is also clear, from the rapid deterioration of the situation during the following day, that the fire had transmitted itself from the deck load to the spaces below and that the ship was doomed, despite the attention of the French emergency towing vessel left on the scene.

It was a big ship to be sunk so fast, in such a fashion, but emphasises certain vulnerabilities that nobody seems able to address.

What on earth can be done about fires that originate in containers, or, in ro-ro ships carrying vehicles with fuel in their tanks or flammable cargo in trailers?

Insurers complain there is a serious container fire pretty well once a month. The remains of the giant Maersk Honam, in which five crew members lost their lives, seen being towed off to repair was a recent reminder that the size of a ship merely magnifies the dangers people face, rather than making it safer.

There has been justifiable anger about cargo misdeclarations – people simply lying about their contents, or failing to comply with dangerous goods regulations. There seems no doubt that there exists a sizeable number of people who couldn’t care less about the safety of those who will carry the boxes they have packed. And that won’t be changed until these blighters are identified and prosecuted – all the helpful advice in the world won’t make any difference to these people. There seems no alternative to more checking, more intelligence shared between carriers and more of the book thrown at the wilfully negligent.

And if, despite all these precautions, there is a cargo fire in a ship at sea, there is still no magic bullet that will save the ship and prevent lives being hazarded. A few fire monitors and hoses on deck aren’t really effective if there are blazing boxes fanned by the wind, in a storm that is throwing the ship around. You can drill until the cows come home, but if you cannot take away one leg of the fire triangle, the fire will continue to burn.

And if fires in containers are not bad enough, those on ro-ro decks are deadly, with exceedingly limited time to contain a fire that has set a vehicle alight.

Could we drastically redesign these essential ships to contain fire spread, provide far more effective extinguishing systems and stop people having to risk their lives? Or do we just comfort ourselves with the percentage game, suggesting that most ships and their cargoes get to their destinations unscathed, collect the insurance and get on with maritime life?

It’s a sort of moral argument, but one that will never go away.