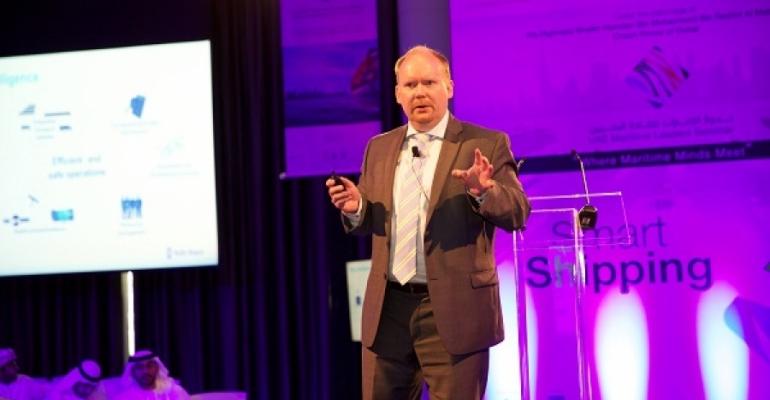 Shipowners will neeed to do more than simply tweak existing vessel designs and business models if they are to meet the International Maritime Organization's (IMO) ambitious target to reduce greenhouse gas (GHG) by 50%.

An autonomous 40,000 dwt handysize bulk carrier dubbed Blue Breeze, with four 30m Flettner rotors and a six megawatt diesel-electric engine, and a 4,000 teu no-ballast, wide-beam, point-to-point container ship were two of the concepts presented to journalists earlier this week by ship autonomy guru Oskar Levander, Rolls-Royce Marine’s senior VP of Concepts and Innovation, as he assessed ways in which shipping could adapt to meet emissions and efficiency targets agreed recently by the IMO.

Remote control and autonomy, he said, had the potential to slash marine transport costs by more than 25% and global shipping’s carbon dioxide emissions by at least 50%, but waste and non-productive activity would have to be minimised if shipping were to change sufficiently to meet the targets. The industry would have to adopt a completely different mindset, he said, starting with a move away from ‘prototype shipbuilding’ in which every ship – even sisters in the same series – are different. Standardisation, as had been adopted in other transport modes, was essential.

Levander pointed out that bulk carriers operating in the Baltic Sea spend 34% of their time in ballast carrying water and, together with general cargo ships, 40% of their time in port. Intelligent asset management, particularly remote control and autonomy managed from shore-based centres overseeing asset health and energy consumption, would be essential facilitators, Levander said, in maximising ship productivity.

Read more: No stopping the digital revolution in shipping

He questioned whether some of shipping’s existing business models were actually as effective as they could be. Analysis carried out recently, for example, had shown that a 4,000 teu containership operating a point-to-point schedule between Asia and Europe would be more efficient and offer lower slot costs than an ultra-large vessel calling at a range of ports at both ends of the voyage.

The smaller would cost less in capex terms per unit of cargo, would be capable of completing a round trip at lower speeds in less time – 53 days compared with 62 – and would also use less fuel per teu.

The key to all this, he said, would be shore-based control centres importing real-time data for effective asset health and energy management, using the latest digital technologies and ship-shore connectivity.