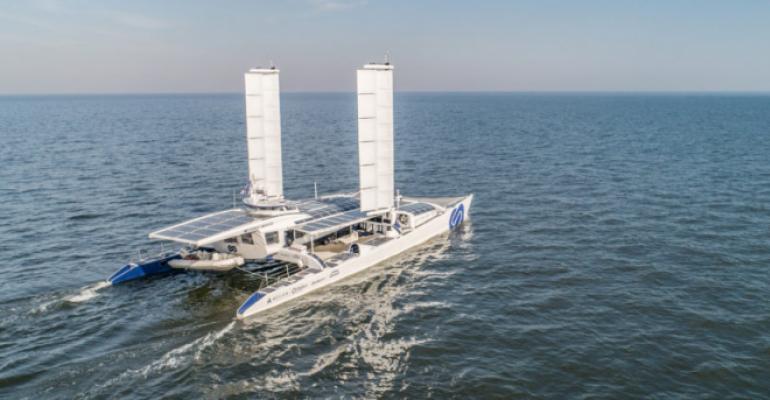 A French yacht powered by sail and electricity generated from an on-board hydrogen production system gives shipping a glimpse of how an emissions free future will look for the industry.

The Energy Observer is a converted America’s Cup catamaran which is driven by an electric motor powered by a hydrogen fuel cell. The hydrogen is produced on board using a desalination plant to produce fresh water, a proton exchange membrane (PEM) electrolyser that splits the hydrogen atoms from the oxygen component in water molecules and a compression unit that pumps the liquid hydrogen into storage tanks.

Energy Observer is also covered in solar panels for extra electric power that can be stored in an on-board lithium ion battery pack weighing 1.7 tonnes and recently installed wing sails have added to the vessels range of power options.

The yacht was in London as it sails around the globe to raise awareness of the technology that is already available for ships to operate with zero emissions. It has already called at ports in the Mediterranean and will depart for the Baltic Sea after fitting a larger fuel cell, according to Louis-Noël Viviès, managing director of the Energy Observer project.

Viviès told Seatrade that while Energy Observer is only a 30.5m yacht the technology can be scaled up to operate on larger ships. The group operating the vessel have already entered into a partnership with French container line CMA CGM to develop a system for emissions free auxiliary power for its boxships.

“The partnership with CMA CGM will focus on the generators because many ports are restricting diesel emissions from vessels that are loading and unloading at their terminals,” said Viviès.

He went on to say that while this technology is currently relatively small scale a number of companies, including ABB, Siemens and Rolls-Royce are investing heavily in fuel cell technology. “Most [fuel cell] systems today are between 50-600Kw, there are no systems above 1MW available, but with the development of new technology, systems of 3-5MW will be available within the next five years,” claimed Viviès.

Madadh (pronounced Maddy) MacLaine, a founding member of the Zero Emissions Ship Technology Association (ZESTA) which was established in 2018 to accelerate the transition from fossil fuels, believes that hydrogen’s time has come.

MacLaine said, “At ZESTA we are working with several clients on designs for zero fuel ships. The concept is really fairly simple. The primary mode of propulsion is using wind as a direct renewable and then capturing any excess energy.”

Energy Observer has already led to a number of other projects that are still in development, including 15 vessels 70m in length, with a capacity for 90 passengers that will be powered by renewable energy, said Viviès. He went on to say that Energy Observer will sail to Japan for the carbon free Tokyo Olympics due next summer. Japan is using its own form of hydrogen derived from Australian brown coal with any carbon that is emitted captured and stored.

Later the vessel will travel to California where there are a number of hydrogen projects already under way, before travelling to Africa in 2022 and New York and then returning to Europe.