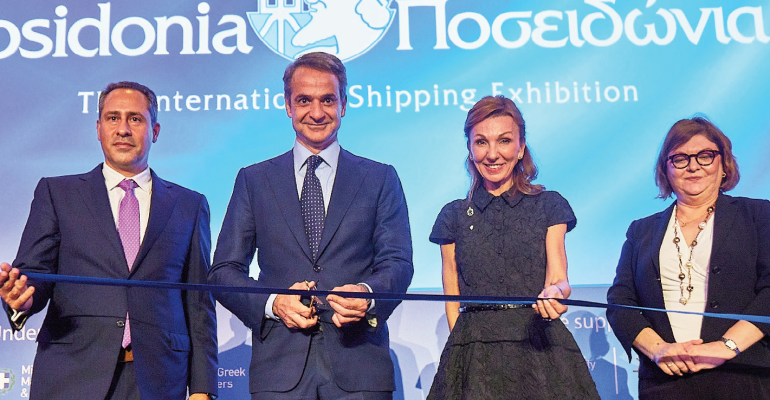 Greek Prime Minister, Kyriakos Mistotakis, flanked by Theodore Vokos, Managing Director of Posidonia Exhibitions (left) and Melina Travlos, president of the Union of Greek Shipowners and Adina Ioana Vălean, EU Commissioner for Transport, launches Posidonia 2022.
Opening to the sound of rapturous applause, representatives of the world shipping community, atomised for two years thanks to the pandemic, reconvened for the ribbon-cutting on the world’s biggest shipping bash.

“Every Posidonia is special,” said a triumphant Theodore Vokos, Managing Director of Posidonia Exhibition SA, taking the stage in front of a packed hall of audience members, many of them wearing masks. “It is time to celebrate the reinstatement of Posidonia after a long health and economic crisis. The Greek shipping sector has shown remarkable resilience in reinventing itself against strong headwinds, and is now stronger than ever before.”

Speaking in front of an 800-strong audience comprising heads of state, international shipping ministers, EU officials, chairpersons of international organisations, Greek cabinet members and decision makers from the world’s biggest maritime companies, the Greek Prime Minister opened his speech praising the Greek shipping industry for its 7% contribution to the country’s GDP and the 200,000 jobs it has created for Greek citizens.

Related: ‘Further action is needed’ as MEPC 78 gets underway

The overall atmosphere was one of tentative jubilation as the joy of reunion was clouded by the Russian invasion of Ukraine. Greek Prime Minister Kyriakos Mitsotakis acknowledged the outsize role that Greek energy trades play in the current paradigm shift, saying: “The war in Ukraine forces Europe to look toward energy markets in the Middle East, in Africa and America. These new markets can be conquered by shipowners.

“We ask the Greek shipping industry to understand that there must be stability in the world. This war must end.”

MItsotakis slammed the influence of “authoritarian and autocratic leaders… who use any excuse to violate the borders and the sovereignty of their neighbours”.
Recurrent in the opening ceremony speeches was an emphasis of the key role shipping plays in low-carbon transport. Speakers made clear their concerns over EU regulations, with the need to decarbonise ultimately requiring a level playing field.

Mitsotakis stressed the importance of shipping being treated with an equal footing. “In the 19th century the Greek shipowners turned from sail to steam, and now we must do the reverse – returning to a shipping that is neutral from an energy point of view. We have to intensify research, to develop new technologies and fuels, [but] second, it is imperative that we revise EU rules to allow competition across transport modes to happen on an equal basis, so that he who pollutes will be paying. This is a historical challenge that calls for a united front,” said the Prime Minister.

“Over the past four years, shipping proved once again that it is all-weather,” said Melina Travlos, who in February became the first female President of the Union of Greek Shipowners. “The figures speak for themselves; over 90% of world trade; 70% of EU foreign trade. Custodian of the prosperity and wellbeing of people, of states, and of society. In times of peace, times of war, and times of global crisis, shipping has managed to navigate this volatile environment.

“It is a top priority that Europe not create deadlocks. Shipping is multi-dimensional; understanding it requires study, specialisation and years of expertise. We must awaken those in charge and enlighten them with what is really sustainable.

“Greek shipping is a national asset, and it is particularly important that the state recognises the superiority of our shipping nationally and internationally. We should guard our status as a maritime nation.”

EU Commissioner for Transport, Adina Ioana Vălean called attention to seafarers and their heroism, who kept needed materials moving even as the rest of the world ground to a halt. “Covid-19 changed consumption patterns overnight, complicating crew changes, increasing congestion. Asymmetric recovery around the world has not helped. But delivering food, medicines, and everyday goods, seafarers were the unsung heroes of these times.”

But smiling in the face of grim headwinds and upcoming challenges, Prime Minister Mitsotakis delivered his parting words: “As Pericles said: great is the power of the country that controls the sea. Fair winds and following seas to you all!”.

This article first appeared in the Tuesday June 7 2022 edition of Posidonia Today, the show daily publication for Posidonia.