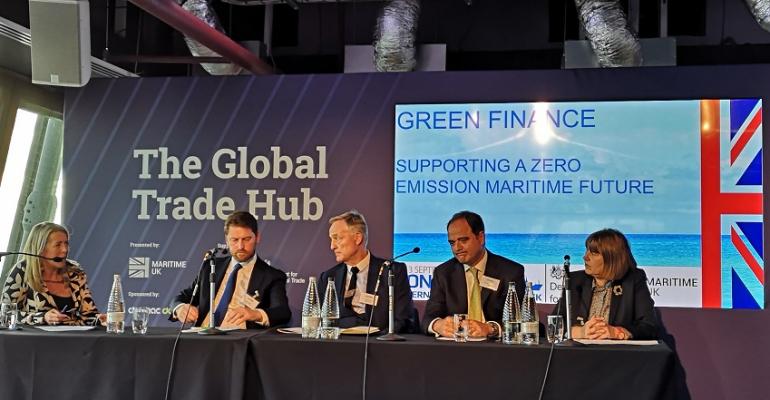 Any shipping banker not considering green issues and climate concerns when weighing up a customer and a potential transaction is now under-performing. This was the clear message from Sir Roger Gifford, chairman of the Green Finance Initiative and a Senior Banker at Skandinaviska Enskilda Banken, speaking in London.

He was addressing a diverse range of delegates including owners, lenders, green marine product developers and intermediaries at a Maritime London and UK Department of Transport seminar focusing on green finance held during London International Shipping Week.

The Poseidon Principles were an excellent indicator of a new approach by leading lenders, he said. Sources believe that new signatories to the Principles, under which banks commit to appraising a borrower’s environmental, social and corporate governance strategy and sustainability criteria, are likely to be revealed soon. It is thought that the first Asian banks are likely to join the 11-member group, comprising the initial start-up group of ten European banks and one US bank.

Shipping has the lowest level of carbon output per tonne kilometre, Sir Roger pointed out, although the sheer scale of world trade means that the sector’s carbon footprint is large. Green finance, including loans and bonds, would underpin the transition from high- to low-carbon operation as it gathers momentum, he said.

However, Lloyd’s Register’s Katharine Palmer pointed to the gap in financial support for new green technologies, enabling them to provide sufficient assurance for bankers that the efficiency gains that are claimed can actually be realised in practice.

As Stephen Fewster, global head of shipping finance at ING, declared: “We’re not venture capitalists. Funding new technologies will not come from banks.” He conceded, however, that Export Credit Agencies and new green funding schemes could help in the verification of new carbon-reducing initiatives.

The role of shippers and charterers was a recurring theme amongst the speakers who included Paul Taylor, global head of shipping at Société Générale, Tony Foster, ceo of Marine Capital and the UK Government’s Minister for Maritime at the Department of Transport, Nusrat Ghani. There was little incentive for owners to invest in new efficiency technologies if there was no risk-sharing with their customers, or upside for them.

Lindsey Keeble, global maritime sector head at law firm Watson, Farley & Williams and a Partner in London’s Asset Finance Group, conducted an interview with Noah Silberschmidt, ceo of Silverstream Technologies. The air lubrication developer has developed a technology which reduces the resistance of ships’ resistance by injecting bubbles into the boundary layer around the ship's hull. The company has just announced a tie-up with Hudong-Zhonghua Shipbuilding. Its Silverstream System is to be incorporated into the shipbuilder’s future designs for LNG carriers.