Hapag-Lloyd will not use Arctic sea passages 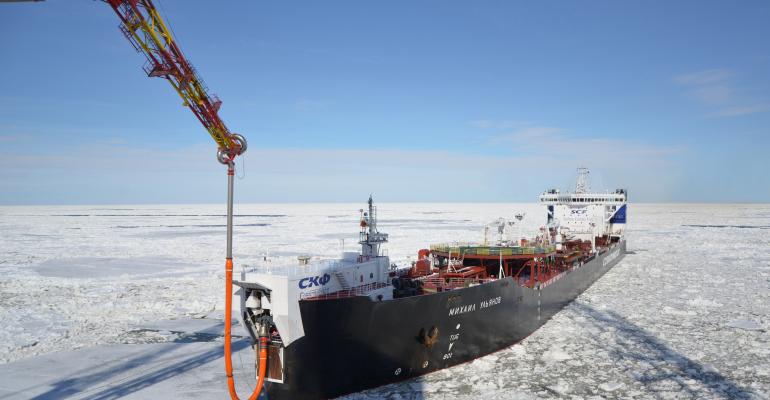 Arctic shuttle tanker Mikhail Ulyanov.
Hapag-Lloyd has joined fellow container line CMA CGM in saying it will not use Arctic sea routes that are becoming ice-free in summer offering the potential of significantly shorter voyages.

While the Northeast Passage, also known as the Northern Sea Route (NSR), offers significantly shorter voyage time and distances between Asia and Europe the environmental impact of its potential large scale use by commercial shipping remains controversial.

Asked about using Arctic sea routes, Jörg Erdmann, senior director sustainability at Hapag-Lloyd, said: “Hapag-Lloyd does not use the Northwest Passage or the Northeast Passage as shipping routes right now, nor are there any plans to do so in the future.

“The particles produced by the combustion of carbon-based fossils and fuels contribute to global warming, which can in turn harm our ecosystems. As long as there are no guarantees that these passages can be navigated without negatively impacting the environment, using them is out of the question for Hapag-Lloyd, as well.”

However, while lines are taking an environmental stand the economic benefits to container carriers offering year round weekly schedules and utilising ships in excess of 20,000 teu in capacity on the Asia – Europe trade are also distinctly limited.

“The significance for container shipping is still very limited because the window of time in which this region can be navigated continues to be relatively narrow, which is why using it regularly would be rather difficult at present,” Erdmann commented.

“What’s more, since container ships operate in liner services, we must take a long and hard look at whether the time one might save from the shorter distances offered by using the Northwest Passage and Northeast Passage would result in genuine economic benefits, especially when taking into account the draughts of larger ships or the fact that ships would likely need to have the appropriate ice classes.”

While there have been an increasing number of trial voyages via the NSR, the only major user at present will be Yamal LNG and upcoming Arctic 2 LNG projects in far North Russia with specially built Arc7 ice-class LNG carriers.