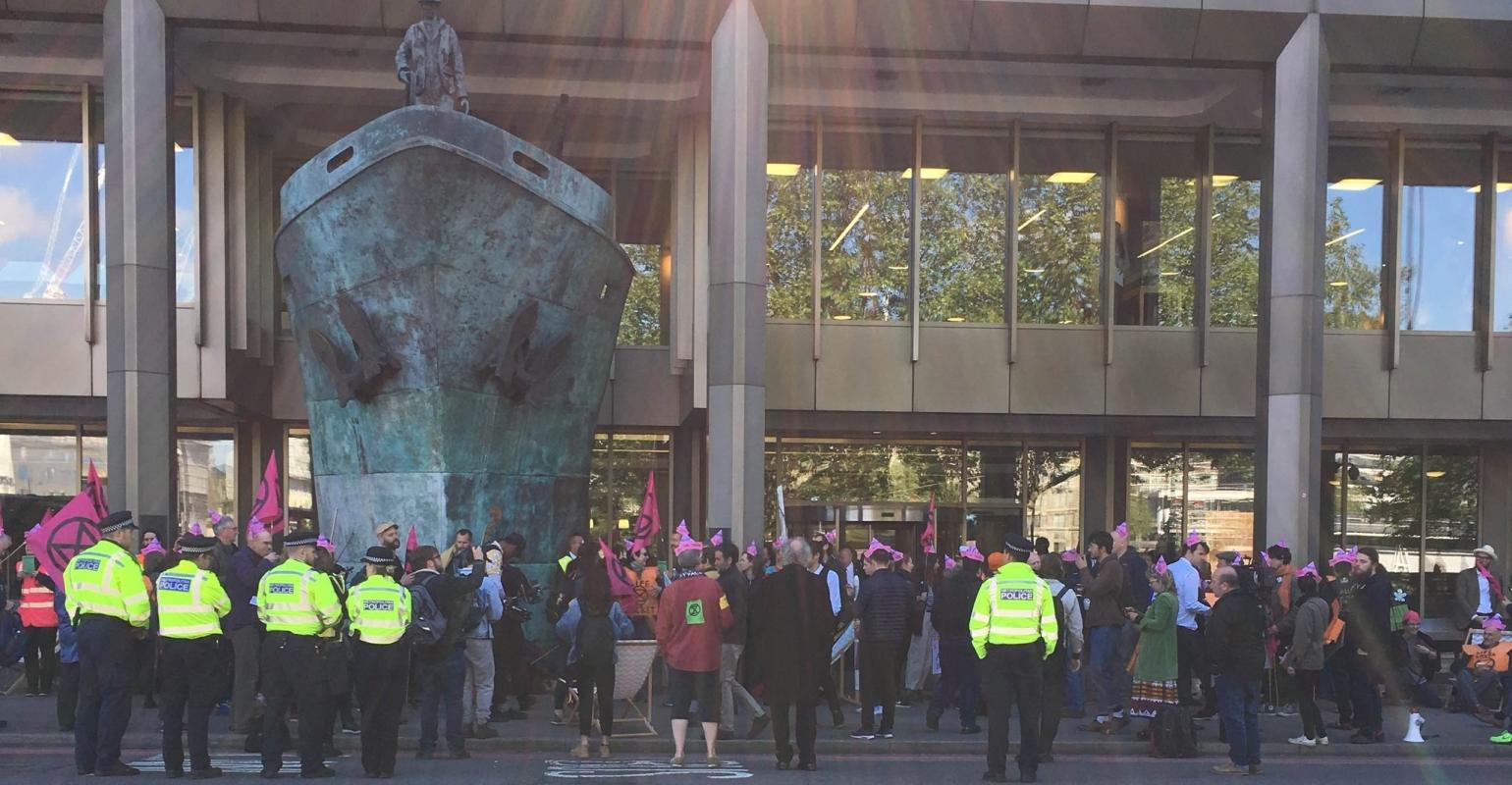 Protesters at IMO taken from Nautilus International Twitter
Michael Grey worries that the protests around the IMO’s MEPC 74 meeting could deflect from necessary action for the longer term to tackle environmental issues.

The International Maritime Organisation has traditionally been regarded as a technical, rather than a political organisation, arguably one of the better UN agencies for this focus upon technical issues. It is worth reminding ourselves that it was originally established to improve marine safety, and its environmental responsibilities came rather later upon the scene.

IMO attempts to reach its decisions as a result of consensus, with arguments based on the world-wide technical expertise that is available from the member nations and the various non-governmental bodies that have consultancy status. As a mechanism for fulfilling its terms of reference on maritime regulations, it does a reasonable job, which is important when you consider that what is decided at IMO will eventually affect every seagoing ship in the world. So science and engineering, rather than sentiment and political expediency ought always to rule in its deliberations.

Hopefully they will, although you have to be a little worried when you consider the almost hysterical background to the current MEPC 74 meeting, with baying mobs chanting in the streets about “climate change” and the small bearers of paper boats urging their taught but simplistic solutions upon the delegates.

At a time when politicians are queuing up to assure the demonstrators how seriously they are taking the activists’ demands and how important is the message being internationally transmitted by the Swedish teenage seer, it is a brave IMO delegate who will question the wisdom being received from all sides. And we live in an age of extraordinary intolerance, where no scientist or academic dares to question or debate the conclusions of computer models which inform our thinking on the menace of CO2 and the implicit evil of all fossil fuels.

In such a climate, it is very difficult to see the regulatory march to what people like to call “zero emission shipping” developing in a rational and engineering-based fashion. Take the simplistic demand for “slow shipping”, which seems curiously to have attracted industry supporters. Has any one of the delegates, sitting behind their pretty paper boats, really digested any technical or practical analysis of what the consequences of such a strategy might be? There are economic consequences, even though the activists will doubtless be delighted, but it surely involves an awful lot of guesswork.

There is a rather sinister enthusiasm for “localism” and thus curbing world trade, which, if it gathers momentum, will surely affect the demand for ships, which itself will be affected by the world fleet making longer passages. It might also make many millions of poor people even poorer. Talk of mandatory speed limits, the de-rating of machinery designed to get the most of a ship’s hydrodynamic efficiency is really quite worrying. It might seem to give effect to that old saw “more days – more dollars”, but there is more to it than this!

There is also a worrying impatience for precipitate action, for short-term measures, that will show those sincere green-minded people that the maritime industry and its regulators are listening to them and taking their concerns seriously. But there is a serious risk that this will deflect the necessary action and resource from the longer term, but arguably far more important development of better designed ships, cleverer ship operations, true engineering solutions and, above all, cleaner and new types of fuels, none of which can be conjured out of thin air.

It is futile to argue with the industry-hating revolutionary activists with their tubes of superglue, and the environmental agencies which take a more extreme stance these days, but it is worth emphasising the practical progress that is being made right across the environmental spectrum. At sea, in port, on ferry routes, in the container trades and major tanker operations, the shipping industry knows it has to become more sustainable and is taking practical, incremental, steps. There is a path to be followed. There is nothing to be ashamed of. But whatever progress is being made, it won’t stifle the shrieks of the mob.