HomeMaritime NewsRegionsEuropeLNG - The marine fuel of the near future?
Recent
Geographies
Recent News
Louis Dreyfus vessel to have world’s largest suction sails
May 17, 2022
Simplify and standardise to support seafarers
May 17, 2022
Handling a tanker fire in New York harbour
May 17, 2022
US offshore wind '30 by 30' coming to life
May 17, 2022
Trending Now
Number of containerships waiting at Chinese ports doubles
Apr 20, 2022
Shanghai lockdown: Disruption grows to logistics, shipyards and production
Apr 18, 2022
Ningbo-Zhoushan hits record container volume amid Shanghai lockdown
May 09, 2022
US container prices tumble as yards overflow with empties
Apr 19, 2022
Live From Nor-Shipping 2019
brought to you by

LNG - The marine fuel of the near future? 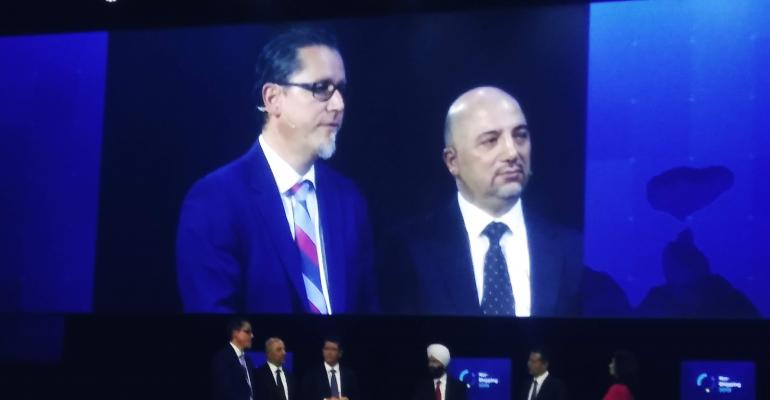 As shipowners start to grapple with CO2 emission targets for 2030, and then 2050, the role of LNG as a fuel marine very much comes into question.

Is LNG the fuel of the near future by getting a significant way to meeting 2030 CO2 targets, as well as complying with IMO 2020, or is it too big an investment for what would be a stop gap measure?

LNG has been seen as a cleaner alternative marine fuel for a number of years now but its uptake has been at nowhere near the pace many predicted. At a Nor-Shipping press briefing ABS highlighted that it has taken 10 years for LNG bunkering infrastructure to develop and supply less than 1% of the global fleet.

So as that development of infrastructure starts to take off finally is LNG’s time now or has it already passed given the need to reach a 50% cut CO2 emissions from 2050, and LNG only reaches about 25% of that?

The lack of wide-scale infrastructure to date certainly does put some owners off. As about LNG as marine fuel during the Nor-Shipping opening conference Ali Shehab, ceo, ​Kuwait Oil Tanker Company, said he was “all for it” when asked about using LNG as fuel, but then added he didn’t see loading arms at the terminal for LNG bunkering, and that you needed infrastructure and investment.

However, on the same panel Rashpal Bhatti, vice president of marketing freight, BHP was upbeat about the prospects LNG-fuelled ships believing it made a much better investment than a newbuilding that runs on low sulphur marine fuel.

“That model of the 20-year base of asset depreciation is no longer relevant because today it’s going to be a very brave vessel owner that goes to a yard and says ‘I’ll order this vessel that’s a low sulphur fuel oil vessel because it’s relevant for the next 20 years’, because it’s not.

“LNG will happen in the next few years and we will see a quantum leap in tha,t and thereafter we will see hydrogen,” he stated.

BHP was part of the Green Corridor Joint Industry Project with DNV GL that delivered designs for an LNG-fuelled Newcastlemax bulker and a very large ore carrier.

Certainly some major owners are throwing their weight behind LNG, including AET, Sovcomflot, and CMA CGM, although the former two, or their parent company in the case of AET, also have significant links to the LNG trade and experience in operating LNG carriers.

As of the end of 2018 there were 782 LNG and non-gas carriers either using LNG as fuel, or being built with the capability to use, according to ABS. In its new report ‘Setting the course for low carbon shipping’ LNG is one of a wide range options examined by the classification society.

The report comments: “Even though the use of LNG as a marine fuel is increasing there are obstacles to the pace of adoption. Bunkering infrastructure is presently limited, newbuilding and conversion costs are comparatively high and it has limited potential to meet the industry’s ambitious emissions reduction targets by itself.”

It is this limited ability of LNG powered ships to meet future emissions targets that is a key point, and brings the question such a vessel could be converted to another run on another fuel type in the future.

In their media briefing at Nor-Shipping DNV GL ceo Remi Eriksen highlighted the need for optionality when ordering a new vessel to allow for it to be converted to a different fuel type at a later date.

However, even conversions of vessels designed as such are not that straightforward as the current conversion of the “LNG ready” containership Sajir by Hapag-Lloyd highlights. The conversion 2015-built “LNG ready” vessel will cost some $30m and take 105 days to carry out.

So in theory it might be possible to convert your LNG ship to run on another type of gas for example, but it would seem likely the conversion process would be neither particularly cheap nor quick to be carried out.