Strong results for Port of Dunkirk despite pre-Brexit uncertainty 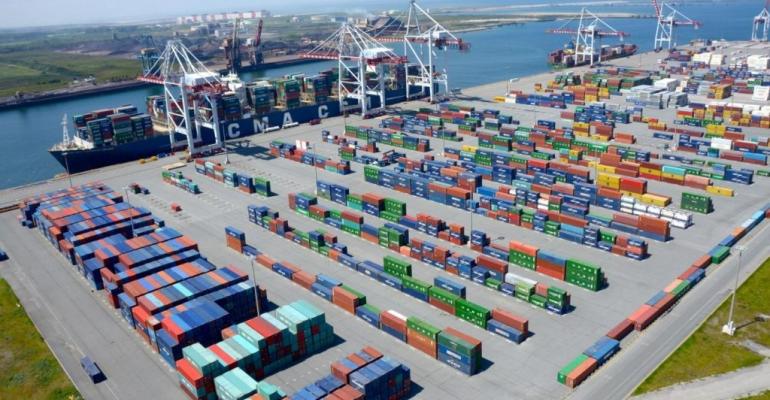 Port of Dunkirk officials classified 2018 as “a good year” with overall throughput up 3% year-on-year from 50.2m tonnes to 51.6m tonnes, and predicted 2019 would be “a very good year”, at a press conference held in regional capital Lille yesterday.

The strong results were achieved despite a 4% drop in cross-Channel ro-ro volumes to 15.6m tonnes reflecting what was called a “consolidation” of traffic pre-Brexit.

However, container traffic was 13% ahead at a record 422,000teu, occasioning an extension to the Flanders Quay container terminal due to open in Q1; solid bulk was up 5% to 25.91m tonnes, including record ore volumes of over 15m tonnes; and liquid bulk was up 8% to 5.4m tonnes driven by the build-up in LNG traffic (to 1.2m tonnes) as a result of the nearby LNG terminal, Europe’s second largest, having opened two years ago.

These strong results point to a “new development path” for the multipurpose port going forward, said ceo Stéphane Raison, also drawing a line under the lingering effects of the 2008 financial crisis and subsequent shutting of two local oil refineries.

The port is also now moving ahead on environmental issues, planning to introduce bunkering of LNG as a marine fuel and a shore-power facility for containerships – Europe’s first – by the end of the year, he detailed.

Regarding Brexit, Dunkirk will be potentially less affected than neighbour Calais by any congestion due to greater border inspections because of the disparity in the two ports’ respective ro-ro traffic, and has said it will carry out “the necessary work so that [Brexit] has no impact on the flow of goods at the level of the port.”

Raison informed that Dunkirk would be ready to carry out any veterinary and agricultural checks necessary, and that the French customs authorities had showed “an extremely positive attitude of collaboration.” Maintaining “fluidity” of traffic was in the strategic interests of all, he added.