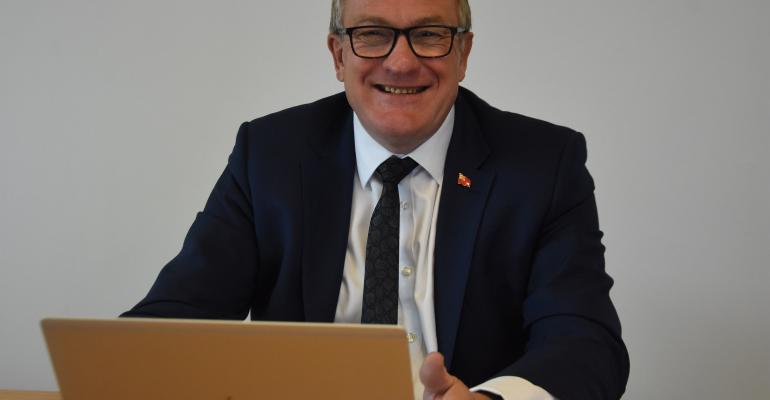 Brain Johnson, MCA
Brexit has opened the floodgates for the UK Ship Register (UKSR) – in the wrong direction. At the beginning of the year, the UK-flagged fleet stood at around 16.5m gt. Today, it stands at 10.9m gt.

The UKSR is responding with geography. Where the flag was previously limited to owners within the European Economic Area (EEA), eligibility for the flag has now been expanded to include Commonwealth countries and another 20 countries on top of that.

“Eligibility for the flag has been massively expanded and that gives us a much bigger pool of shipping to look at,” says Brian Johnson, ceo of the Maritime and Coastguard Agency (MCA).

He readily admits his frustration over the impact of the UK’s exit from the EU. The UK Ship Register has much to say about quality, service, responsiveness and technical capability – amongst many other virtues – but Brexit is a situation totally beyond its control.

“The fleet has gone down substantially; over the past couple of months we have had a number of significant exits from the register, all EU-exit related,” says Johnson. “These are either on the back of the high and continued level of uncertainty or because ships are financed in a way that the finance covenants say they have to be registered with an EU flag.

“We have been very careful to test whether there are service issues or other issues around the flag as people have been unflagging. It simply isn’t the case – it is purely around the EU exit, so quite black and white.” The big question has been – where to take the register next? A business plan ‘that takes us from EU exit into the future’ has been drawn up and Johnson says expanding the eligibility is a fundamental part of that.

“But the other thing we are very keen to do is to get the offer around the flag much clearer. We provide a really well-regarded technical service at the MCA and I really want that to be much clearer to those looking at the UK flag – our level of technical expertise.”

The register has the advantage of being part of the MCA, ‘which really hosts the IMO in London’, he says. “There is a real closeness of shipping and the flag to the whole global policymaking, as well as through DfT (Department for Transport) policymaking and that is an intrinsic part of the offer.”

The UKSR has been through a big transformation over the past couple of years, says Johnson. “We weren’t always as responsive to customers as we needed to be on the survey side and we are now in quite a different position, getting high levels of customer satisfaction.”

The register now has a surveyor permanently based in Singapore, is looking to put surveying capacity into other key locations, and is using class more than it has in the past.

But this Brexit elephant in the room won’t go away. Johnson says: “We have to get our head over the parapet and in terms of a hard launch of the new UKSR, it would be better to have complete clarity as to where we sit from the EU perspective. The challenge is that it is not clear even when we will have that clarity. So we have taken the decision to start cracking on with things, such as the eligibility improvement.”

This expansion means the register is talking to people ‘who frankly are not too bothered about the EU exit’, he says. The new list of countries – which includes China, the US, Liberia, the Marshall Islands, Panama, Bahrain, Brazil, UAE and Japan, amongst others, brings UKSR into parity with the rest of the Red Ensign Group.

As a ‘national’ register, the UK was bound by ownership tied to the UK; accession to the Common Market/EU meant its European partners were included.

This latest move makes UKSR an international register but emphatically not an open register, says Johnson.

Amongst other changes, the register is to give shipowners flexibility; if they want to bareboat charter a vessel to a third party which is in turn required to be flagged with a different register, there are provisions for the owner to take the vessel to another flag for a short time, before heading straight back to the UKSR.

“This is responding to feedback we have had,” says Johnson.

In terms of Brexit exits, he believes the register has plateaued now. “Ships have been exiting because of political and financial considerations that are out of our control. For ships coming in, there are different dynamics. We are looking to build a long-term pipeline with ships coming into the register and there is a compelling offer from the UK flag.”