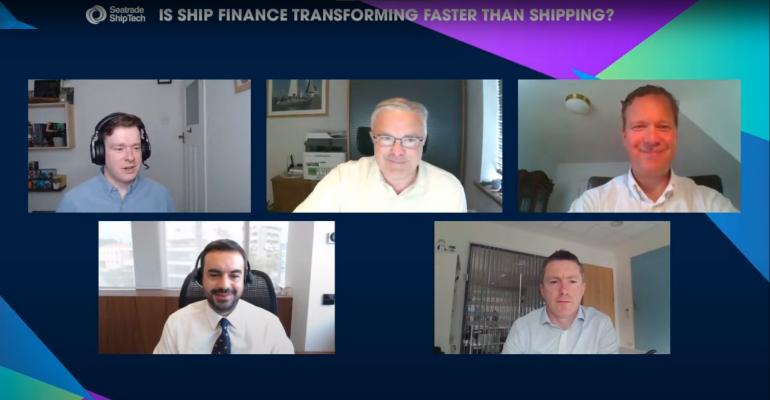 Pressure on financiers to support more environmentally friendly projects has created an opportunity to finance green shipping projects, according to a panel of experts.

Speaking at Seatrade ShipTech Virtual – Is Ship Finance transforming Faster than Shipping? The panel said that money was available at prefrential rates for the right projects.

Dr. Jan-Henrik Hübner, Global Head of Shipping Advisory, Maritime, DNV said the classification society was working with banks active in shipping and other industries that have hundreds of billions of dollars dedicated to green and ESG-related projects, although shipping would need to compete with other sectors.

“If you come with really green projects, the banks’ doors are extremely wide open to get funding at slightly favourable interest rates. If there's something really green, I think there's no scarcity of money at the moment. It's rather that the ship finance people of the banks are looking for good green projects which they can bring forward in their bank, because they have targets also to have green- or sustainability-linked finance,” said Hübner.

Interunity Principal George Mangos refined the point: “I don't think there's necessarily a bonanza of cheap money, so much as the money has to be cheaper in order to take away the some of the associated costs.”

Mangos recalled an instance where two projects for LNG-fuelled small container and dry bulk vessels struggled to reach viability, even with the cheaper money behind them. Related government grants were “massively oversubscribed” said Mangos. “I think we're still not in a position where most of the projects really are economically viable yet; That, I think, requires a lot of work.”

Paul Tivnan, CFO, Ardmore Shipping recognised banks for their efforts in creating the Poseidon principles in 2018, a move he believes lit a fire among shipowners to start taking decarbonisation and green finance seriously.

“It created an incentive, now we're two years on and we're hopefully gathering momentum and going to get to a very good place,” said Tivnan.

Houlder Ltd Strategy Consultant, Sean McLaughlin, said that the Poseidon Principles were born from more than just good intentions. “The real driver was a hard commercial fact that if you don't recognize the impact of climate change on business, then those banks will end up with loan books which are worth nothing, because the underlying assets that sit behind that lending will be worth nothing,” said McLaughlin.

McLaughlin stressed that he was not being critical of the Poseidon Principles, but saw their creation as a sign of banks understanding the scale of the issue facing industry. The Bank of England choosing to stress test the UK financial sector on its climate change resilience was a further sign of challenge ahead.

“I think the simple thing for people to think about going forward is this isn't about finding a bonanza of cheap money to carry out some projects. This is recognizing a direction of travel. If you don't recognize that, you'll have a problem,” said McLaughlin.

Tivnan pointed to a more immediate impact on banks in the absence of the Poseidon Principles. “If the banks did not do something, and they continued to finance older assets that are not performing very well on CO2, then in a weak market, those ships will get badly impaired,” said Tivnan. Evidence of that is already clear in the market, he said, as access to finance for ships of over 12 years old was unavailable from the leading banks.

“So, you have seen over the last two years a surge in alternative lending providers, which are now providing mezzanine financing for older ships or midlife ships. So you are seeing almost a bifurcation of the shipping finance market to high quality, modern ships and a clear focus on decarbonisation, and others who are kind of asset players focusing on mid-life ships and less concerned about co2, high risk stuff with higher pricing attached to it as well.

“Banks have always been selective, but now they've another reason to be selective,” said Tivnan.

The panel backed carbon taxes as a means of encouraging lower carbon development and pressuring less efficient operators to improve.

“Having a carbon price for the remaining lifetime of a vessel  being built now, whether the carbon price is $100 or $150 or whatever it is, helps a lot of projects to take the green, the decarbonized choice,” said Hübner. Such a carbon price would promote innovation and development towards decarbonisation without the need for government subsidy, although such subsidies may still be useful in the beginning.

Mangos said that the confluence of environmental targets across maritime and finance aligned the objectives and incentives of both lenders and the shipping industry. “This confluence is is extremely positive. It will help pave the way for the whole transformation of the industry,” said Mangos.