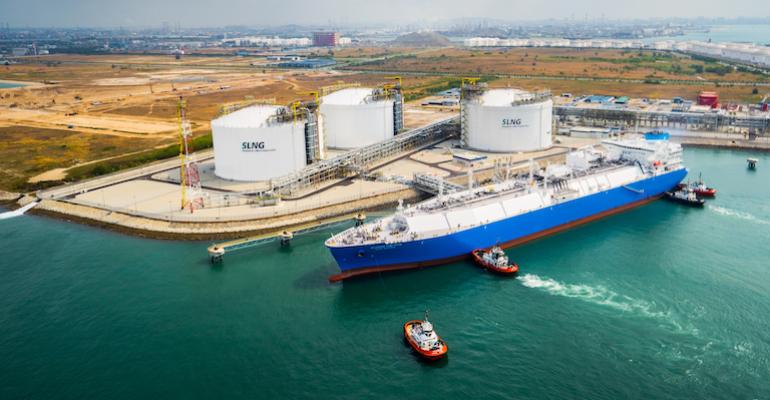 LNG carrier berthed at Singapore LNG
LNG shipping rates of $500,000 have hit the headlines but the reality is the spot market remains small and investors in the sector are attracted by its long-term fixed contracts.

Indeed, a theme emerging across multiple sessions the conference was that LNG shipping is increasingly the province of “Infrastructure investors”, who prefer fixed contracts with lengthy terms.

This is complemented by a reality described by Evercore investment banker Mark Friedman in a deal overview; “investors in shipping shares don’t like complicated structures”.

Friedman went on to detail a variety of recent transactions, including a handful where listed LNG entities, some tied to out-of-favour Master Limited Partnerships (MLPs) were taken private. These included Golar LNG, subsumed within entities tied to New Fortress Energy, Teekay LNG which was bought by a Canadian infrastructure powerhouse, and GasLog where BlackRock’s Global Energy & Power fund bought listed shares, now holding a stake in a private entity alongside the Livanos family.

LNG related shipping is increasingly, though by no means totally, the province of institutional investors. On the LNG panel, BlackRock Infrastructure executive James Berner, closely involved with his firm’s GasLog holding, explained that, with 80% of its business on long-term charters, “GasLog was attracted to us, as an infrastructure investor,” with share investors not valuing the low-risk nature of such positioning. “They wanted a deep pocketed partner that would think long term,” he said.

Echoing very similar views was Art Regan, of Energos Infrastructure, where PE investor Apollo Management has joined forces with New Fortress to create a multi-billion dollar platform, built around the existing 11 vessel Golar assets acquired by New Fortress in early 2021- with carriers transferred on to another entity- CoolCo. Energos will be on the lookout for long-term deals on LNG carriers, but also FSRUs and FSUs.

Regan, a decades long veteran with Apollo, described how Apollo’s PE strategy has evolved from earlier attempts, with mixed successes, to play the cycle in various shipping sectors, to “an ultra-structured deal” which is “a long-term investment meant to provide a minimum yield over a period of time.”