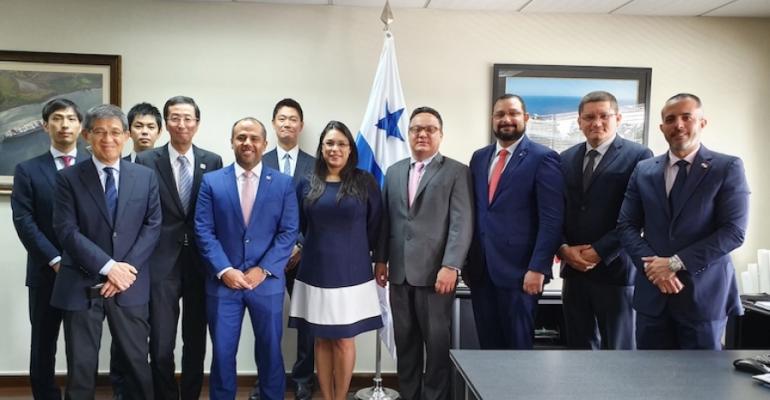 The Minister of Maritime Affairs and administrator of the Panama Maritime Authority (AMP) Noriel Araúz were visited by a delegation from the Japan Shipowners’ Association (JSA) headed by its vice president Takashi Nakashima.

“We will not only continue to expand the co-operation between our two countries, but we will strengthen our collaboration in technical aspects because if you have a better performance, we can have a better flag,“  Minister Arauz told JSA vice president Takashi Nakashima and the members of JSA who accompanied him.

“The AMP has a policy of open-door and will not be an authority to put obstacles, but where dialogue and cooperation will be encouraged,” Arauz said.

JSA’s vice president Takashi Nakashima remarked that JSA’s visit represented the visit of almost 130 companies that are part of the association and who have much of their fleets flagged with Panama. The co-operation bridge tended by the new AMP administrator Noriel Arauz was “significantly appreciated” by the Japanese companies that face a difficult current global situation with a market in low demand and low supply, said Nakashima.

This first important meeting show the need to expand strenghten the links [between the AMP and JSA] even more and represent “a challenge and greater opportunity that, as a flag state, we are willing to take,” said the head of the Ship Registry Rafael Cigarruista. “We want to hold more meetings and contacts in the coming months in order to find connection and development points in which both countries and entities can benefit,” he added.