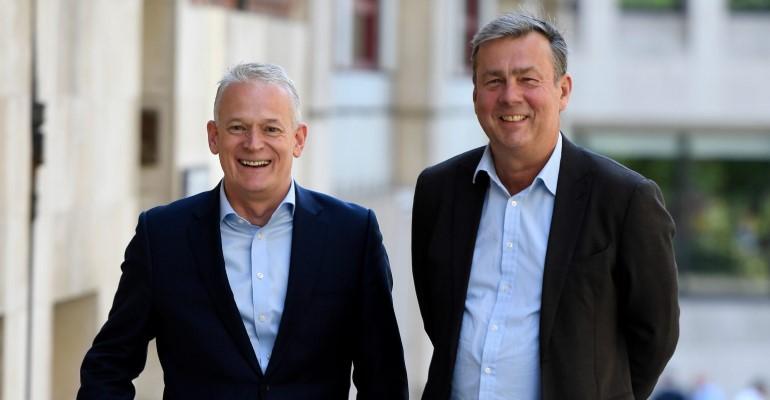 North P&I Chief Executive Paul Jennings and Standard Club CEO Jeremy Grose
The events of the past 12 months have vindicated North P&I and Standard Club’s decision to merge and create NorthStandard, according to its leaders.

Discussions around the merger of the two mutual insurers started almost two years ago and predate much of the recent market disruption, but the decision to create a larger and more sustainable entity in NorthStandard has proven prudent, North P&I Chief Executive Paul Jennings and Standard Club CEO Jeremy Grose told Seatrade Maritime News.

“If the last 12 months or so have taught us anything, it is that there is always huge uncertainty. We’ve seen the terrible human toll of the Russia-Ukraine war and its consequences on global financial markets.   The scale of these events was not in our thoughts when we were putting this together, but such events do happen and will continue to happen. We absolutely believe this is the right thing that we're doing. If anything, recent uncertainty vindicates our belief that we need to be in a position to be more sustainable,” said Jennings.

Related: The role of P&I - geopolitics and sanctions

“I think [the merger] gives us more capacity to be able to deal with challenges and uncertainties as a larger organisation with a larger premium base and a broader footprint across the world,” said Grose.

“Those resources can be arranged in a whole series of different areas, whether that's the acquisition of reinsurance, or retention of risk, or building up and retaining talent. The people we have across our two organizations are fantastically talented - between both clubs , we've dealt with the two largest P&I casualties in history, and we are bringing all those people together.”

Upon its creation on February 20 – the traditional day for renewals in P&I – NorthStandard will become the largest mutual insurer, or tied with competitor Gard, depending on the measure used.

But whether NorthStandard is number one or number two does not matter, said Jennings, as the important outcome of the merger is a greater ability to sustainably serve a changing market.

“One major change for shipping, as we move forward now, is the decarbonisation journey. We were very clear, it's not our role to drive that, but it should be our role to support members as they go through that transition at whatever pace they're going through it. Again, having a larger team and larger capability enables us to support our members through that journey.”

Grose said that where P&I clubs can offer support in the decarbonisation journey is in helping owner to manage new risks.

“Decarbonisation will throw up new types of risks. And that's an area of skill and knowledge which needs to continue to be developed. We're all developing an understanding of what it all means, and we also have to think about the issues from a P&I perspective - what does ammonia do to the engine of the ship? What does it do when there’s a spillage? What does it do in terms of personal injury, exposure and risk? These are all new things, which we are building knowledge about, but so much better to be able to do that on a on a concentrated basis, spreading the cost of developing that knowledge, than then having to do it multiple times,” said Grose.

“Alongside all that are contractual issues whether it’s for our owners or our charterers which are already coming out of those decarbonisation regimes that are entering into force already,” said Jennings. “The combined bank of experts and lawyers that we are going to have in NorthStandard will be better able to provide that advice and guidance.”

One group of owners the combined entity may face a challenge in retaining is those with existing fleets split between North P&I and Standard Club for reasons of diversifying risk and exposure.

“I think bringing the two clubs together, there will be occasions where instead of a shipowner having two clubs they will only have one going forward, and that probably won't fit with their diversification strategy. We anticipate that some of our owners will want to introduce another club, but that's built into our financial planning and our business plans,” said Jennings.

“The similar attitude of the two clubs is the strength of the personal relationships that we have with shipowners,” he added.

Both clubs have deep relationships with shipowners whether on the underwriting or claims side, and those relationships are going to remain steady, the CEOs said.

Grose said he had seen a great deal of engagement and interaction between the North and Standard teams which brings confidence that they will work together for the benefit of members and ensure continuity.

Jennings said the companies had been transparent from the outset that the driver of the merger was not making savings through cutting people and jobs, because those people are needed to serve customer relationships.

“Where we see the benefits on the people side is that we can grow the business without having to grow the headcount too much. It's not about trying to reduce headcount; I think we feel we can be more effective and more efficient as we grow. By taking the best of both of our systems and processes and enhancing those as well,” said Jennings.

Neither Jennings nor Grose see a particular rush to consolidation elsewhere in the P&I space but expect the NorthStandard merger will shake up an industry that has perhaps become complacent after a long period of stability.

Jennings paraphrased Cesare d’Amico, CEO of d’Amico Shipping and soon-to-be chairman of NorthStandard, who said early in the merger process that the benefit of being the first mover in any market consolidation is the ability to choose a partner freely and getting your first choice, rather than being forced to react to an external development.

NorthStandard is set to be stablished on February 20, 2023 at 1200 hrs with consolidated annual premiums of around $750m.