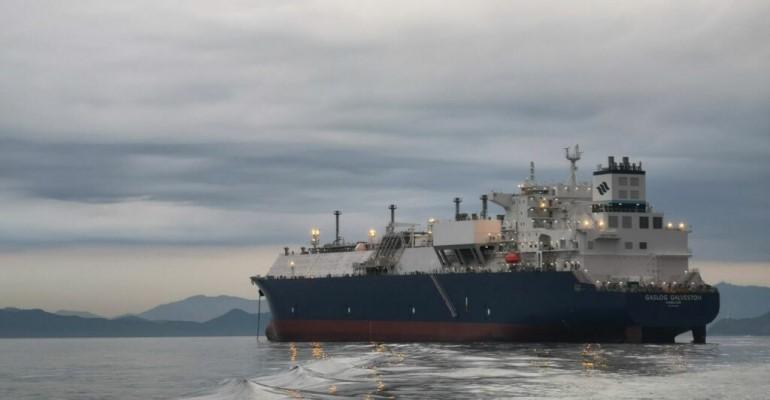 The study led by Queen Mary University of London measured emissions onboard GasLog Galveston on a roundtrip voyage from Corpus Christi to Europe. Measurements on the Cheniere-chartered vessel were taken on the full trip including loading, laden voyage, unloading, and the return voyage in ballast.

The study measured CO2 and methane emissions from the main and generator engines, along with fugitives (unintentional leaks, typically from seals or equipment connections) and venting emissions (intentional emissions via dedicated outlets to atmosphere) from the onboard LNG and vapour handling plant, and other sources including the gas combustion unit (GCU), auxiliary boiler and reliquefaction pant.

Methane slip, or uncombusted methane emissions from the engine exhaust, were found to be in-line with manufacturer data, but higher than seen in other studies. The higher methane slip was found from the generator engines, which are commonly not included in emissions monitoring.

GasLog Galveston was built in 2021 and the measurements were taken on its second voyage. In all, 68.1 t of methane emissions were reported for the journey, which represents 0.04% of the delivered LNG. 60% of those emissions were from the generator engines, and 39% from the main engines.

Despite producing much less power than the main engines, generator engines produced much more methane slip. “For emphasis, this means that ∼8% of all LNG that is sent into the generator engines slips out and is emitted directly to the atmosphere,” said the report.

Engine load and exhaust temperature were found to be major factors in the level of methane slip, with methane slip reducing substantially as engine load increases.

“The ship in this study was new, and this was only the ship’s second voyage, and so, operators preferred to have two engines in operation at any one time to avoid any shutdowns in case one engine stopped suddenly. However, if engines were operated closer to ∼80% load, methane emissions would have been reduced by over half,” said the study.

The study recommended that further studies be carried out to establish a firm baseline on LNG carrier emissions and to answer questions raised by this study, including:

Dr Paul Balcombe, the Principal Investigator and lecturer in Chemical Engineering and Renewable Energy from Queen Mary University of London said: “This study helps to fill a big data gap when it comes to methane emissions from LNG shipping. It’s vital that we understand what their emissions profile is at a time when LNG imports are likely to grow substantially to reduce Europe’s reliance on Russian gas.”

Fiji George, Cheniere’s Senior Director for Climate and Sustainability, said: “Following the recommendations by the study, Cheniere is expanding our emissions monitoring on the majority of our chartered carriers to further put this science into action.”

Kostas Karathanos, Gaslog COO said: “GHG and air emissions reduction is a priority for us… we therefore enthusiastically joined this initiative aiming to better understand and monitor methane emissions from LNG carriers. The industry needs similar studies to gather concrete data and establish confidence in the operational emissions. This is essential in determining impactful mitigating measures and pursue realistic reduction targets.”

The results and recommendations were published following peer-review in the journal Environmental Science and Technology (American Chemical Society).

The study was funded by Enagas and CAMS (Collaboratory to Advance Methane Science), and administered by GTI Energy.