Crew reskilling and diversity pays off in a crisis 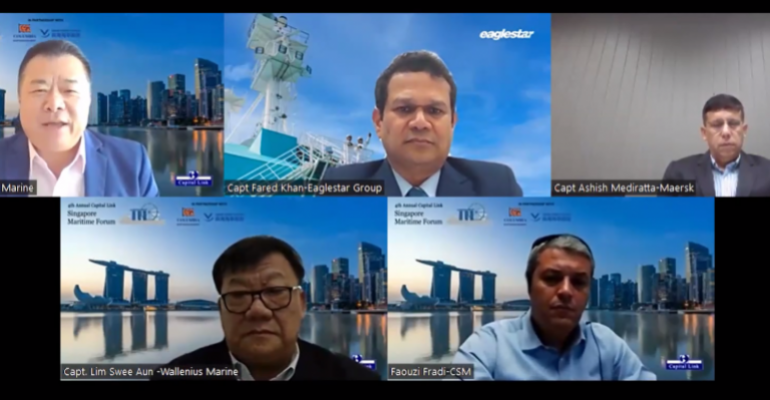 A diverse pool of seafarers trained to handle a variety of vessels are a boon in a crisis, according to a panel of crewing experts.

Speaking at the Capital Link Singapore Maritime Forum as part of Singapore Maritime Week, panellists discussed crewing strategies in the midst of geopolitical tensions and COVID, with diversity and retention central to the discussion.

On the war in Ukraine, Capt. Faouzi Fradi, Crewing and Training Director, Columbia Ship Management Group said that historically, Russian and Ukrainian seafarers were mixed onboard vessels and that since the war broke out, the situation remains professional.

“The biggest challenge is the martial law in Ukraine where any male between the age of 18 and 60 cannot leave the country—which of course we understand, it's a country’s decision and we fully respect that—this might come with huge challenges in the near future, if there is no peaceful solution for this war,” said Capt. Fradi.

Capt. Ashish Mediratta, Head of Crewing, Fleet Management and Technology, Maersk, said the industry should be patient in its response to the war in Ukraine, as the impact of the conflict on Ukrainian seafarers will take time to become clear. Some Ukrainian seafarers are already returning to ships after settling their families in countries like Poland and Romania, and we still cannot know how many more seafarers will return to work once their families are safe, said Capt. Mediratta.

“We really have to be mindful in order not to try and resolve it in one month, it will take maybe three, four months,” said Capt. Mediratta.

Capt. Lim Swee Aun, General Manager, Wallenius Ship Management and Chairman, Singapore Maritime Employers' Federation (SMEF) said that despite not having any Russian or Ukrainian seafarers at Wallenius, he is concerned about the war’s impact on crewing.

“We are worried that other companies may poach the crew or go to the Philippines or go to other areas to draw their crews [instead of Ukraine] and then crew wages will increase,” said Capt Lim. Wallenius.

Geopolitical risk was among the reasons some panellists promoted diversity in the nationalities in seafarer pools, with the COVID pandemic another example.

Capt. Fradi said that although the majority of Columbia’s ratings are from the Philippines, the company has a large number of officers from across Eastern Europe among its 14,000 seafarers. COVID restrictions around the world made operations difficult, but “that diversity of the pool helped us a lot to manage our challenges,” said Capt. Fradi, including taking on vessels from Chinese yards during the pandemic.

Capt. Mediratta said that increasing the pool of available pool of seafarers includes a concerted effort to attract female seafarers and explore new nationalities for recruitment.

Capt. Fared Khan, HR Director, Eaglestar Group said that Eaglestar had found greater crewing flexibility through investing in its existing seafarers. Eaglestar aims to reskill and retool its existing crews to create ‘universal seafarers’ who can work across the group’s oil and gas-powered vessels as well as its DP shuttle tankers.

“Our strategy is to look at our seafarers as a holistic talent pool right across, rather than segment-wise, focused only on one type of ship which actually restricts them from a career perspective as well. So, this is actually a win-win right across,” said Capt. Khan.

Capt. Khan believes this approach will become more common in the future, as companies look to increase operational flexibility as the maritime industry adopts a wider range of fuels.

The speakers agreed that retention was important, with factors like mental health support, connectivity, good quality food, good communication and a sense of ownership all helping to keep seafarers on the books.

Capt. Mediratta said that the industry will have to accept a certain level of seafarer pay increases as inflation rises, but warned that if wage increases become critical, it will incentivise companies to search for new sources of seafarers to increase supply.