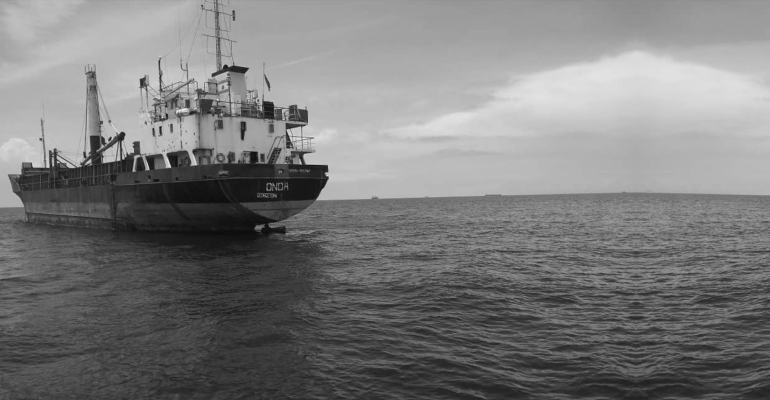 Seafarers stuck aboard a cargo ship at the Port of Dakar’s anchorage without sidelights or electricity are in grave danger.

The International Transport Workers’ Federation (ITF) has drawn attention to the plight of the crew of Onda, a ship declared abandoned in December 2021 which has been at Dakar for over five months.

Four seafarers remain on the vessel from Cameroon, Lebanon, Nigeria and Syria. They are owed between five and nine months’ pay, and ITF has had to step in to supplement the insufficient provisions sent to the crew by Honduran owners Amin Ship company and operators AMJ Marine Service.

With a broken-down engine, Onda has no electricity and no lights to alert other vessels of its presence to avoid collisions.

“Dakar’s anchorage has ships coming and going all the time. It sits a few kilometres from West Africa’s main shipping lanes,” said Steve Trowsdale, Inspectorate Coordinator at the ITF.

“An unlit vessel positioned there at night puts the lives of the Onda’s seafarers in immediate danger as well as those on any ship passing by. There has already been one near miss. If an oil tanker crashes through the Onda, there will be an environmental as well as human disaster.”

When ITF contacted Dakar port authorities requesting Onda be towed for repairs, they were told the port was too busy.

“That’s unacceptable,” said Trowsdale. “Effectively, they are prioritising the business of the port over the safety of seafarers. I hope the people who have made this decision can be persuaded to change their minds before there is a catastrophe and they have the lives of seafarers on their consciences.”

ITF said Onda has an uncertain flag status, and suspects the ship is operating under a false flag.

Onda has been abandoned before by its current owners. In 2020 the owners falsely claimed the ship was laid up, and went on to deceive seafarers out of their pay.

“This time around, the Onda’s owners and operators did not respond to the ITF when the federation asked them to explain why the ship has been left in the dangerous situation or when the crew will be paid,“ said ITF.