Situation ‘dire’ for seafarers in Sea of Azov as supplies dwindle 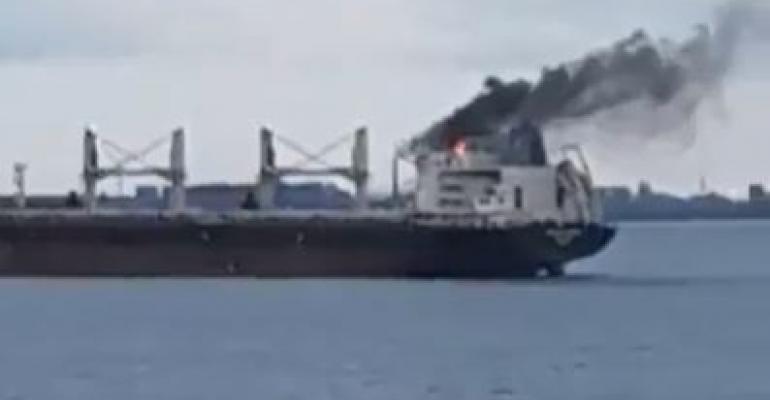 The ITF described the situation for seafarers stranded on vessels near Ukraine as ‘dire’ as supplies dwindle and rescue efforts are frustrated.

In a briefing call hosted by the International Transport Workers' Federation (ITF) and International Chamber of Shipping (ICS), the organisations said they were aware of around 140 vessels stuck in the Sea of Azov. Some vessels have only skeleton crews, but in total over 1,000 seafarers of at least 20 nationalities are affected, they said.

“We know of one remaining ship with 20 seafarers on board which has just three days of supplies left and it's unsafe for them to leave the ship or for the ship to sail,” said ICS secretary general Guy Platten.

“I think the situations is actually very dire, said ITF general secretary Stephen Cotton. “I think we have to recognise there's competition for food depending on which ports you're in and where you are on the coast. It is literally a matter of life and death for some of those Ukrainians still locked in defending their cities, and you can imagine that their first thought is not going to be to resupply ships or foreign nationals at anchor.”

Both ITF and ICS said they were focused on trying to avoid the worst-case scenario of supplies running out, and that they have had some success in the past getting supplies to vessels when supplies run critically low.

Related: War in Ukraine will push Asia – Europe rail cargo back to sea

“We hope that's the case this time, but it just shows the jeopardy that we're under on every day that goes past,” said Platten.

The establishment of blue corridors to allow vessels to sail out of the conflict area has proven difficult and dangerous, said Platten, with risks including mines around ports and hazards under the water like sunken barges.
“We have got an agreement with the industry that we can send people home but at the moment, if you're in the worst parts of war-torn Ukraine, there's no ability to get off the vessels and move,” said Cotton.

“So, for us, this is one of the most frustrating moments. We have everybody in agreement about how to help, but an inability to safely move people. Until both countries, in particular Russia, agree to recognise that these foreign nationals are hostages to the situation, we can't recommend they move, so they're having to stay on board the vessel and then the challenge becomes about supplies.”

Cotton said that the ITF has not heard of any incidents of fallout aboard vessels where Ukrainian and Russian seafarers work together. One of the biggest factors for Ukrainian seafarers is trying to confirm the safety of their families as the war drives a mass exodus of civilians from Ukraine.