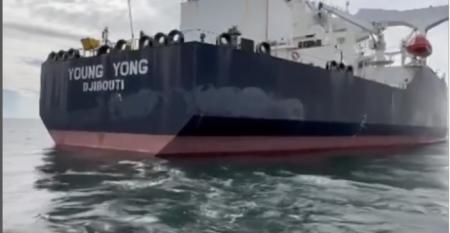 Singapore warned Djibouti-flagged VLCC prior to grounding
Nov 01, 2022
The loaded VLCC Young Yong grounded in Indonesia waters in the Singapore Strait was warned of shallow waters by the Singapore authorities.

Tanker refloated in the Suez Canal, averting lengthy blockage
Sep 02, 2022
Fears of another Ever Given-style blockage of the Suez Canal were averted yesterday when the Egyptian...

Ever Forward goes nowhere as first refloating attempt fails
Mar 30, 2022
An attempt to refloat the Ever Forward grounded in Chesapeake Bay has failed and another attempt will be made on Wednesday.

Ever Forward stuck aground outside Baltimore port
Mar 16, 2022
Almost a year after the Ever Given got stuck in the Suez Canal another Evergreen containership – the Ever Forward – has been grounded near Baltimore since Sunday.

Concerns Ever Given seafarers likely to face legal action
Mar 30, 2021
While the containership Ever Given heads for the Great Bitter Lake for inspection following six days blocking the Suez Canal, there is a major concern about how its crew comprising 25 Indian nationals will be treated by the Suez Canal Authority.

‘We pulled it off!’ - Salvors celebrate re-floating of the Ever Given
Mar 30, 2021
The eyes of the world have been watching the salvage operations for the Ever Given blocking the Suez Canal, gripping global media and public attention in way rarely seen in shipping.

Ever Given blocking Suez Canal re-floated
Mar 29, 2021
The Ever Given, containership blocking the Suez Canal, has been re-floated, and manoeuvres are set to be undertaken to fully restore the direction of vessel.
Load More