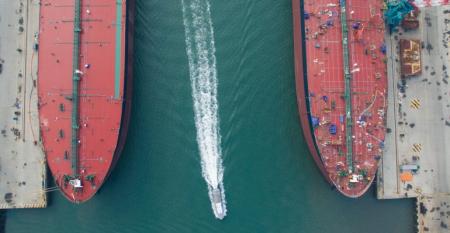 Arbitrator dismisses Euronav’s bid to halt Frontline merger termination
Feb 07, 2023
The emergency arbitration sought by Euronav in relation to its troubled merger with Frontline has been fully dismissed.

Euronav board wipe meeting scheduled
Feb 07, 2023
A special meeting of Euronav shareholders has been scheduled at the request of CMB with one main aim – the...

Bahri posts 441% jump in full year profits on tanker market surge
Feb 01, 2023
The National Shipping Company of Saudi Arabia (Bahri) has posted a strong performance in 2022 on the back of high oil demand due to unstable global economic and security dynamics.

More arbitration in terminated Euronav Frontline merger
Jan 30, 2023
Euronav announced it has filed another request for arbitration in its ongoing bid to prevent the collapse of its merger afreement with Frontline.

Five reasons for tankers owners to be cheerful in 2023
Jan 16, 2023
New York broker Poten & Partners has identified five reasons why tanker owners should be cheerful this year.

Frontline abandons Euronav merger
Jan 10, 2023
After facing exceeding resistance, John Fredriksen’s Frontline has now called off its acquisition of Euronav representing something of a victory for Saverys family interests who had sought to block the deal.

Tanker market outlook – another buoyant year in 2023
Jan 09, 2023
The tanker market enjoyed a dramatic turnaround in fortunes in 2022 as the Russian invasion of Ukraine and resulting sanctions saw spot rates ramp up and a redrawing of trade flows, but will the good times continue in 2023?