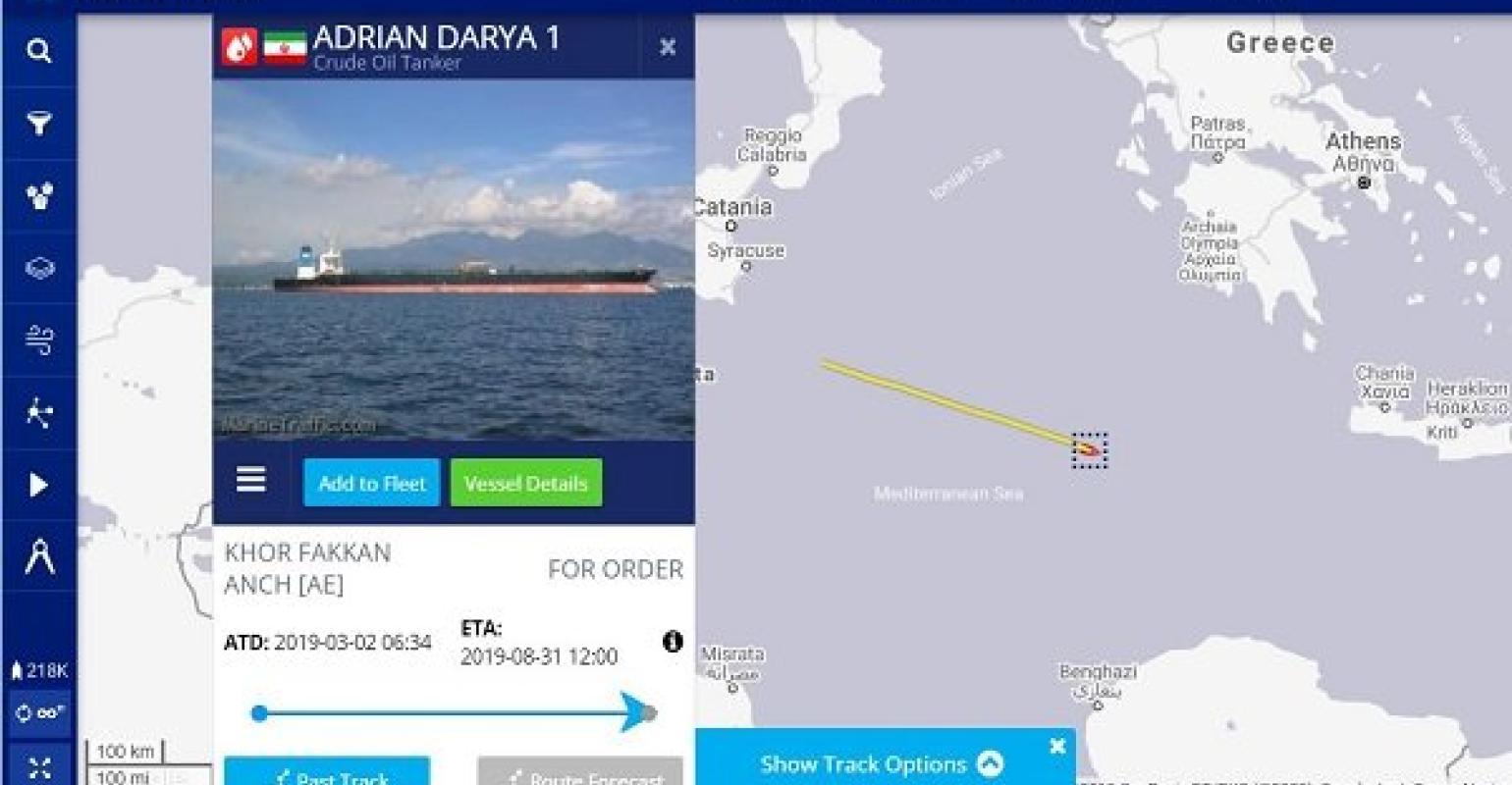 The recently renamed tanker Adrian Darya 1 (previously Grace 1), now Iranian-flagged, has been closely followed by the pundits on all things geopolitical, as well as AIS enthusiasts since its mid-August release from Gibraltar, where it had been seized by British Royal Marines.

The Iranian vessel is sailing eastward through the Mediterranean with a 2.1m barrel cargo,  crude oil that had been loaded in Iran. The US government, had requested that Gibraltar, an Overseas Territory of Great Britain, continue to hold it, but this request was turned down when Iran affirmed that its cargo was not destined for Syria.

The vessel sailed, around 16 August- with its AIS showing its destination as Kalamata, in Greece, with an estimated arrival time of today, 26 August. Soon after, the US Government filed a “Complaint” in the US District Court in the District of Columbia (Washington, DC) seeking to arrest the vessel- based on its Iran connections.

This vessel has been on the US “radar” for some time.  Grace 1, the tanker’s previous name, had gained notoriety in late 2018 when its AIS mysterious went dark as it hovered around Iranian oil loading ports. Indeed, these events of ten months ago figure in the detention request made to Gibraltar (declined) and the subsequent US complaint.

Most tracked ship in the world

Ship tracking site www.marinetraffic.com, in its Twitter feed, had described the vessel as “The most tracked ship in the world right now.” Over the last few days its next destination has switched from Kalamata, to Mersin in Turkey, to now simply “for orders” as it continues to sail south eastwards in the Med.

Most analysts, including our good friends at @TankerTrackers,  are certain it won’t head into Greek waters because it is EU territory.” Greece, unlike Gibraltar, is an EU member. Elsewhere in the Twitter-sphere, there were suggestions that concerns about the welfare of mariners aboard could over-ride the dictates of Greek authorities- who supposedly did not want the vessel in their waters.

The 300,000 dwt, Iranian tanker had been seized, in the Gibraltar Straits, based on a breach of European Union sanctions against Syria, its suspected destination.  However, possible US actions in the future, will be based on its Iranian nexus. The stakes are high here; the media were reporting that the US Secretary of State, Mike Pompeo, had joined the fray, in a harsh diatribe warning of “aggressive enforcement” of US sanctions. In this broad brush, anyone - for example, the Greek government - assisting the tanker would be branded as aiding the efforts of a terrorist organisation.

The legalities of the US Government’s “In rem” complaint,(which, at time of writing, have not resulted in an order to arrest the vessel, are complicated. New York lawyers Chalos & Co. break it down as follows: “The government argues that recent voyages made by the O/T Grace 1 were made near the Iran/Iraq border according to the Vessel’s Automatic Identification System (AIS) position.  Second, the government argues that persons associate with the O/T Grace 1 fraudulently concealed the fact that Vessel received cargo shipments in Iran.  Third, the government contends that the owners of the Vessel attempted to launder money from the shipments made in Iran through US intermediary banks.”

The actual US government complaint, online at https://www.justice.gov/opa/press-release/file/1196361/download is sobering reading for anyone thinking that simply turning off an AIS will allow activities- nefarious or otherwise to go unobserved. The activities allegedly masked when the tracking was disabled in late 2018 include various allegedly fraudulent financial transactions tied to transhipping of Iranian cargo aboard another tanker, Kriti Island.

As all eyes are on this ship-AIS boffins and geo-political analysts included. Meantime, the lawyers at Chalos & Co. note that: “Tehran officials have warned the United States against an arrest or other interference with the Vessel.”