A case for optimism in the Middle East offshore market? 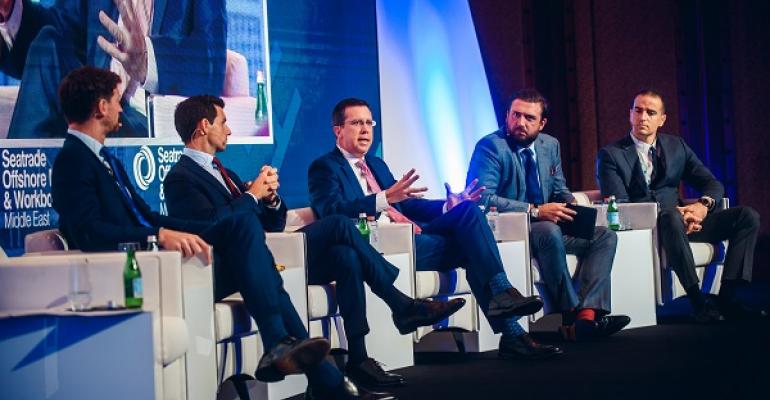 Whether there is really a ‘case for optimism’ in the Middle East offshore marine market was keenly discussed at the Seatrade Offshore Marine and Workboat Middle East (SOMWME) conference held in Dubai this week.

Marcus Machin, ceo of financiers Tufton Oceanic (Middle East), had set the scene at the Dubai Maritime Agenda earlier by reminding that there had been a “brutal market correction” following the oil price slump in 2014 when “everyone felt the pain,” leading to a “depressed OSV (offshore support vessel) sector carrying over into MODU (mobile offshore drilling units).”

But the offshore market in general had seen better hire and utilisation rates “in the last four months than over the past five years,” he added, with DP World’s recent acquisition of Topaz Energy and Marine “logical” and “well-timed” given the latter’s “good exposure and work backlog.”

How oil prices evolve will clearly have a key bearing, with an electronic poll of the SOMWME audience revealing that 68% felt Brent crude would be trading in the $60-$70 range in 12 months’ time, while 28% predicted a more conservative $50-$60, still a fairly optimistic view.

However, Ferenc Pasztor, senior offshore analyst at MSI, pointed out that not only was a strong oil price needed to boost new Exploration & Production (E&P) activity in the region but also a removal of some of the fleet, “especially in smaller AHTS (anchor handling and tug supply) vessels”, if utilisation rates were to get back to pre-2014 levels of 80%. This would  give ship operators “the upper hand in rate setting.” McDermott’s director of maritime operations for MENA regions Doug Korth concurred, saying that AHTS in particular would be less in demand because of rising employment of vessels equipped with Dynamic Positioning Systems, and that anyone with such vessels of 20-years old or more laid up should seriously consider scrapping them instead.

The next two to three years would see a further shakeout of the Middle East market, Korth reckoned, with only viable long-term players still standing in five years’ time

VesselsValue’s head of offshore Robert Day likewise cautioned that “in terms of [asset] values we’re still at the bottom of the market” following a lot of distressed workboat sales, adding: “it’s very easy to see green shoots when you’re at rock bottom.’

On the positive side, Topaz cco Robert Desai said he felt there was “ample room for innovative and agile suppliers” in the current market, seeing a positive in the downturn in having driven cost reductions throughout the offshore supply chain, thereby making it more competitive with rivals such as fracking.

Likewise ABS’ svp of Global Offshore Markets, Matthew Tremblay, pointed out that “oil majors have more free cash than ever before” to invest in E&P.

“The region isn’t safe yet,” one delegate from a local offshore vessel owner attending the SOMWME debate concluded to Seatrade  Maritime News afterwards, “but the market is picking up, projects are coming.”