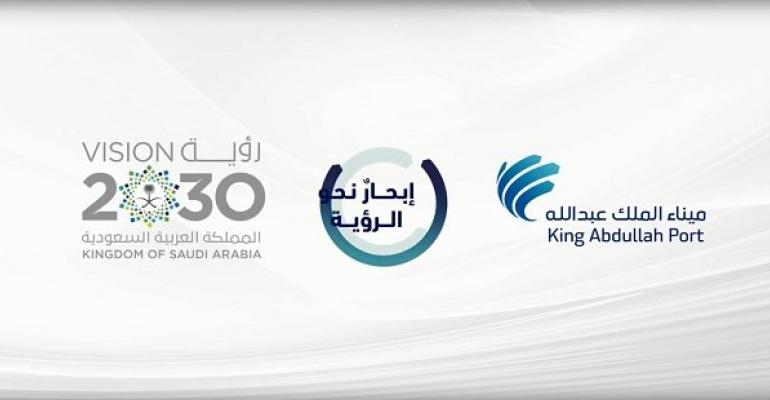 In Profile: King Abdullah Port are a Platinum Sponsor of the Saudi Maritime Congress and will be in attendance at the event in Riyadh on 11-12 March.  Ahead of the show, they share with Seatrade Maritime News their achievements to date in the region, and their vision for the future looking ahead to Saudi Vision 2030.

The inspirational concept that led to the creation of King Abdullah Port was the visionary realization that the Kingdom of Saudi Arabia needed a world class port capable of receiving today’s mega cargo ships in order to handle the increasing number of imports to fulfill the growing needs of the young and fast growing population, while also facilitating increased exports to global markets. Today, the far-sighted concept of King Abdullah Port is completely aligned with the government’s Vision 2030 for an economy that is non-dependent on oil, and boosting the Kingdom’s competitive role.

The groundbreaking for King Abdullah Port, the Kingdom’s first privately owned, developed and operated seaport, and one of the largest private infrastructure projects in the Middle East, took place in 2010. Since its inception, King Abdullah Port has made steady progress toward meeting its goal of becoming a main hub and a vital contributor to the Kingdom’s regional and global role in trade, logistics and shipping. It initiated transshipment operations in September 2013, and full operations, including import and export, in January 2014.

Today, with enhanced capabilities, King Abdullah Port is achieving key milestones in term of overall project development and operations. By the end of 2017, King Abdullah Port achieved a 21% increase in its annual throughput compared to 2016, reaching 1,695,322 TEU, and becoming the second largest port in the Kingdom in terms of container handling. According to the latest figures, King Abdullah port achieved a new record of 50.5% increase in container handling in the first half of 2018 compared to the same period of 2017.

Additionally, King Abdullah Port has the world’s deepest 18-meter water berths, which will apply to all 30 berths, equipped with state of the art cranes that are among the most sophisticated in the world, providing a major boost to operations. As a result, King Abdullah Port has been able to partner with eight of the largest container shipping companies, including three of the world’s biggest: Maersk, MSC and CMA CGM.

The presence of the food and pharmaceuticals sector at King Abdullah Port is also expanding. Enormous reefer racks along with controlled-temperature storage facilities have been installed and the Saudi Food & Drug Authority has established facilities at the port along with more than another 17 governmental entities. Moreover, Almarai, the region’s leading dairy manufacturer, has opted to make King Abdullah Port its base of operations for Saudi Arabia and the region. The decision of this regional powerhouse is another significant vote of confidence in King Abdullah Port and bodes well for attracting more local and regional companies to establish a presence at the port in the near future.

King Abdullah Port is carefully proceeding with the implementation of its roll-on/roll-off (RORO) plans, which include the construction of five RORO berths. Once these berths are fully operational, they will provide a total capacity of 1.5 million CEU per year, making King Abdullah Port the regional leader in RORO cargo.

When fully built, King Abdullah Port will be able to handle 20 million TEU (its current capacity is three million TEU), 1.5 million cars and 15 million t of clean bulk cargo every year. In this regard, operation of the first bulk and general cargo terminal berth in the port began in the last quarter of 2017, well ahead of the pre-scheduled date in the second quarter of 2018, which is a clear indication of the port’s speed of completion and achievement of tangible results.

On the business enhancement level, the continually developing Port Community System, a computerized information system present at King Abdullah Port, provides easy access to information that enables the efficient operation of business. To further facilitate efficiency, Saudi Customs is also establishing a large presence, which contributes to eliminating any unnecessary delays in processing cargo. The dwell time of incoming containers at King Abdullah Port has been reduced to 3.7 days, and work is underway to be reduced to three days only. In addition, King Abdullah Port became a pioneer in activating a 24-hour container inspection initiative and was the first to implement this initiative in Saudi Arabia. As further enhancement to reducing dwell time, the implementation of the Smart Gate system facilitates the process of cargo entry and exit automatically, in addition to pre-booking services for delivering and receiving goods, contributing to the effective operations.

King Abdullah Port has a distinguished track record of attracting the most talented competencies, and focuses on professional development, personal progress and job satisfaction of its staff through its intensive and continuous training programs, which contribute to enhancing its ability to provide high quality services.

Empowerment of females is a priority and to that end, King Abdullah Port already employs more than 80 women in its operations center, administration, IT and engineering, all working to optimum efficiency in a unique dedicated environment.

Looking ahead to a thriving and prosperous future, King Abdullah Port is well on the way to establishing itself as a prime hub on the main East-West shipping route between Europe and Asia, given that more than 13% of all global trade passes through the Red Sea.