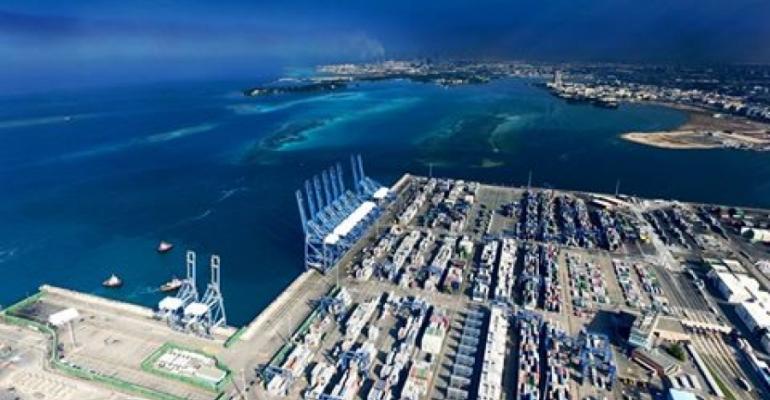 “Coupled with the demand within the Red Sea region for an integrated logistics hub, we set out to construct the country’s first BOT terminal,” says RSGT’s CEO, Jens O. Floe.

“We had a vision to enhance trade, thus regaining Jeddah’s rightful place as the ideal gateway into Saudi Arabia, as well as the transhipment hub on the Red Sea, allowing the port to compete with the leading ports of the world. No doubt, Jeddah as a port enjoys immense importance. Being on a strategic location made it an obvious choice for access into the regional markets.”

The downside was that the existing port, prior to RSGT’s arrival, lacked both the capacity and the capability to handle the operational demands of shipping lines – and of course the new mega vessels. Indeed, worldwide, few existing ports are really ready for these gigantic ships that require sufficient land-side capacity to keep cargo moving for vessels to maintain their schedules.

“Despite the challenging and unique circumstances facing the world, we did not waver in our commitment,” says Floe. “Backed by an economy that has demonstrated greater resilience compared to many of the G20 nations, and a mother-port that has maintained more solid growth in local volume than other ports, thanks to stable domestic consumption, we have delivered as we promised!” “It was a result of aggressive commercial planning, combined with relentless focus on operational and administrative cost,” recalls Floe. “The number of ships handled went up from 14 in January 2010 to 64 in November the same year.”

A major milestone was achieved on October 17 last year, when four of the largest and most modern ship-to-shore cranes arrived at Jeddah, allowing it to accommodate increasing vessel size and growing volumes.

“These new cranes were brought in to increase the capacity of the terminal by 50%, to reach 2.5 million teu, which was bound to have a major impact on the leadership of Jeddah Islamic Port, and enhance the Kingdom’s commercial position,” says RSGT’s Executive Vice-chairman, Aamer A. Alireza.

In the recent past, RSGT has been receiving on a regular basis an increasing number of Ultra Large Container Vessels, each with a carrying capacity of over 14,000 teu, and including the 19,100-teu CSCL Globe, the 18,000-teu Mayview Maersk, and the 19,000-teu Al Nefud.