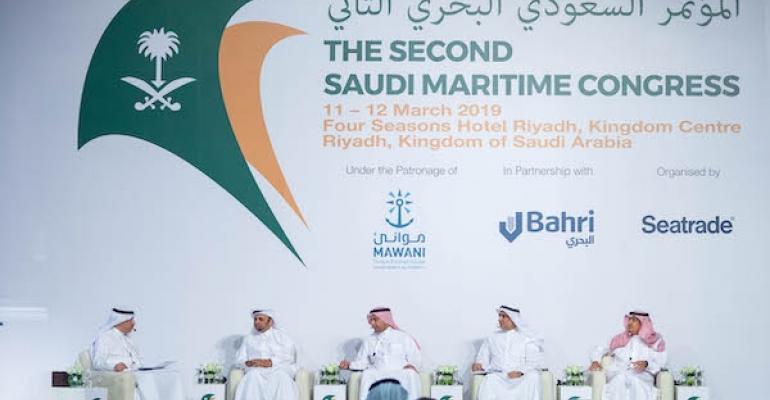 Saudi Arabia’s maritime sector is gearing up to make the kingdom a regional logistics hub and drive forward economic diversification and job opportunity, participants at the Saudi Maritime Congress in Riyadh heard on the opening day at the Kingdom Centre in Riyadh yesterday.

“This event takes place at a time of significant change within the kingdom’s logistic and maritime infrastructure. The Saudi Maritime Congress highlights major projects and strategic opportunities that will solidify the kingdom’s position as a global maritime and logistics hub, and will undoubtedly further our aim of attracting strategic investments and viable ventures into [Saudi Arabia] by highlighting our objectives over the short, medium and long-term,” H.E. Eng. Saad Bin Abdulaziz Alkhalb, President, Saudi Ports Authority “Mawani”, said.

Saudi Arabia is the key player in the Red Sea, which has recently seen a scramble to develop maritime assets as the importance of its strategic location on the section of the world’s shipping trunk route between Colombo and Suez increases in significance to global shipping lines.

“Saudi Arabia’s maritime sector is set to receive a much-needed boost, with the generous allocation of $8.8bn to the energy, mining and logistics sectors in [the government’s] recently announced budget for 2019,” said HRH Princess Sarah Al Saud, Director of Maritime Business Development, Arab Academy for Science, Technology and Maritime Transport.

“In fact, the country is on an aggressive diversification path, with substantial government spending expected to [catalyse] Vision 2030 goals and drive sustainable growth and development.”

Port development is moving ahead, with projects at Dammam and King Abdullah Economic City launched in the last five years to boost the kingdom’s import, export and transhipment potential.

One of the largest projects recently undertaken in the sector is the King Salman International Complex for Maritime Industries and Services, a joint venture of Saudi Aramco, National Shipping Company of Saudi Arabia (Bahri), Hyundai Heavy Industries, and Lamprell. A report published in 2018 by leading Saudi investment bank, Jadwa Investments, said completion of the complex was expected 2022.

“According to Saudi Aramco, the entire project is designed to contribute around SAR64bn ($17bn) to the Kingdom’s GDP, boost import substitution for maritime products and services by around SR45 billion, and create more than 80,000 direct and indirect jobs by 2030. The integrated maritime yard is expected to be the largest in the region, in terms of both production capacity and scale.”

Conference organiser Seatrade has become a key catalyst for maritime development in the Gulf Cooperation Council region, structuring events of particular significance in the United Arab Emirates as well as Saudi Arabia, and boosting the viability of the container, tanker, bulk and offshore segments.

“At the first Saudi Maritime Congress, which was held in Dammam in 2014, and some of you here I believe attended that event, the message was pretty clear. The Kingdom of Saudi Arabia was committed to the development of the maritime and logistics sector, and indeed the maritime industry across the board,” Chris Hayman, Chairman, Seatrade, told the Congress opening session.

“Four years on, that forecast has been overwhelmingly fulfilled in the Saudi Vision 2030 programme. The world is watching in admiration the unfolding of a strategy that will position the kingdom of Saudi Arabia as a global hub, delivering connectivity between Asia, Europe—and Africa, increasingly.”

Eng. Abdullah Aldubaikhi, CEO, Bahri, dwelt on recent adverse trade and regulatory developments that have made the life of shipowners more difficult.

“The trade war between China and the US has a negative effect [on the shipping business], in addition to the different regulations imposed recently by the International Maritime Organisation, regarding sulphur emissions. The call to reduce sulphur content in bunker fuel from 3.5% to 0.5% by 2020 has made shipowners confused. The question now facing the industry is: will sufficient fuel be available to the industry, and how much will it cost?”

Employment opportunities for Saudis are a key goal of the kingdom’s maritime sector. “[Bahri] has implemented several programmes for aspiring local talents designed to open doors to promising career opportunities within the shipping industry and is playing an active role in the kingdom’s Saudization drive,” said Bahri’s Aldubaikhi.

According to Rayan Qutub, CEO of King Abdullah Port, the inauguration of the port by Prince Mohammed bin Salman earlier this month, had led to a number of agreements, including the launch of petrochemicals exports from the facility. Expansion of container capacity at the facility to 7 million teu is now expected, as is the commencement of drilling of the northern basin, paving the way for capacity of 10m teu.

H.E. Dr Nabel Al Amudi, Minister of Transport of the Kingdom of Saudi Arabia, said that Saudi Arabia was concentrating on improving efficiencies in the maritime sector, and that a priority would be the improvement of landside infrastructure, especially rail, in order to improve the logistics performance.

“We have witnessed a major transformation in the effort to develop the maritime sector, as well as exceeding difficulties, and now, for the time being, we are going to reap the fruits of the efforts made by all these entities [to drive the industry forward],” he said.

The third Saudi Maritime Congress will be held in Dammam in March 2020. Follow event website www.saudimaritimecongress.com for further announcements.