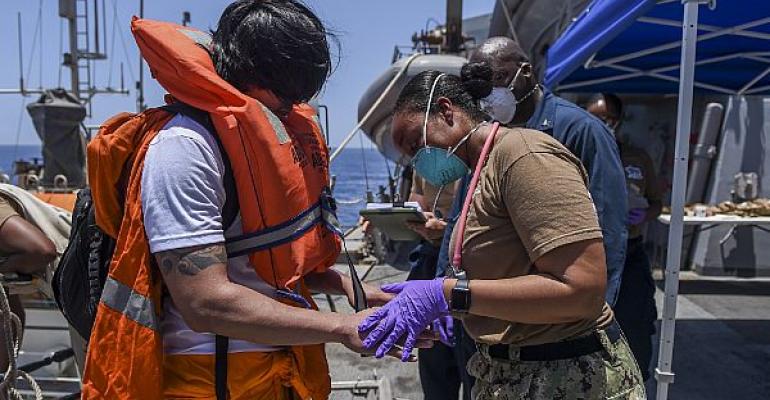 US Navy rendered assistance to a seafarer from the Kokuka Courageous Photo Credit: US Navy
Why should seafarers be constantly put in harm’s way, from pirates, hostile officials in ports that nobody ought to visit, and now as collateral damage as the threat of war breaks out in the Middle East? The answer is, as it has always been, that they have no choice in these matters and have to go where their ship takes them, or lose their jobs.

It is always interesting to compare the alacrity with which governments advise their nationals – tourists and business people – that visits to such and such a country should be confined to essential travel, or avoided altogether on account of the dangers with the advice they give to merchant seafarers. It is an easy comparison – in most cases there isn’t any. I don’t suppose there is deliberate neglect, or malice – nobody will actually say that the lives of merchant seafarers are unimportant. But officialdom doesn’t seem to bother.

The news that the Government of India was telling its nationals at sea not to sail aboard ships heading to the Gulf of Guinea, where the depredations of the kidnappers and pirates have become an international scandal, was a rare intervention. It actually recognised the reality and gravity of the situation, where the government of Nigeria was insistent that it could handle the piracy problem, when it manifestly was not doing so.

The problem is, of course that Indian seafarers will be safer as a result of this ruling, but will end up losing their jobs, as the ships won’t stop trading into these dangerous waters, and will merely change their crews to those of nationals who are not so prohibited. It may be recalled that in 1982, Indian seafarers on British ships had to be withdrawn if their ship formed part of the task force sent to recapture the islands.

Then there was the long Iran-Iraq war, with its frequent attacks on merchant shipping by the aviators of both sides. It was argued that nobody had to sail on those tankers, but if you didn’t, your employability may well have suffered at a time when there was a shortage of good seafaring jobs.

It is usually argued that most voyages are accomplished without being attacked by pirates, even in the coastal waters of Nigeria and that the statistics tell you that you will sail safely. But that isn’t the point, if you are fearful before you arrive in the area of risk, and terrified while you are in it. It is probably not what you went to sea for and you shouldn’t have to put up with such a situation.

It is also complicated by the fact that as a seafarer, you will inevitably be sailing on a ship flying a flag other than that of your own country. In most cases this means that your own national government will wash its hands of any practical concern for your safety and briskly suggest that it is the business of the flag state, which may be unwilling or unable to call down any worthwhile protection.

The Marshall Islands, for example, is an excellent register, but does not have much in the way of naval units. Flags of convenience, as it has often been said, are terribly convenient, except when the shooting starts, or something equally nasty manifests itself. Then, if the truth is told, they become rather inconvenient.

In the case of the Gulf of Guinea problem, which has escalated to such an extent that the major shipping organisations and other elements of the shipping community are holding conferences with senior officials of the Nigerian Maritime Authority, something might be happening. Nigerian law enforcement capacity is building, we are told and the problem of piracy has moved up a notch or two in the priority list. We would like to think that seafarers are going to sleep easier in their bunks as a result, that their relatives will not be worried sick and that the hopes of the Nigerian government will be realised.

And they now have to hope that their next voyage doesn’t take them through the Straits of Hormuz.