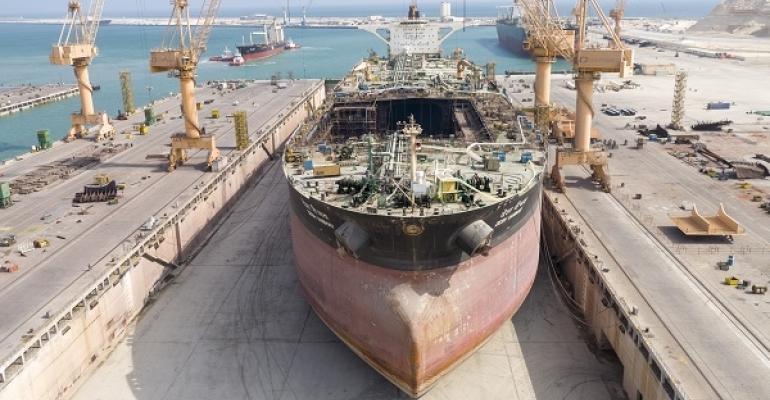 Extensive steel repairs to cargo tank number two and adjacent areas on board the 316,409 dwt Desh Vaibhav, a Shipping Corporation of India-owned VLCC, built in 2005, which suffered a major explosion in the Gulf of Oman last August, are nearing completion at Oman Drydock.

About 3,480 tonnes of steel have been used to replace the mangled remains of the damaged structure in which vital inert gas pipes were ruptured by the explosion, so that the vessel could not be gas-freed prior to docking in Oman. This required a 60-day gas-freeing operation, during which the tanker was isolated within the shipyard, before work could begin on 3 December 2018.

The contract, won against fierce competition from other regional repair companies, is proceeding on target, according to shipyard executives. The original quote, based on a work schedule of 99 days, was significantly less than other yards and has demonstrated the shipyard’s steel repair and project planning capabilities, they claim.

More time will be required, however, than was envisaged in the original quote because significantly more cabling has had to be replaced than expected – 25 km instead of 13 km. Even with this extra work, however, the repair is due to be completed by 31 March in a project that will have taken much less time than was envisaged by other repair yards when they quoted.

Oman Drydock is currently working at close to full capacity and is now regarded as an important contender in the highly competitive Middle East repair sector. Projects completed in 2018 – 118 in total – represented a significantly larger volume than those undertaken the year before and 2018 financials demonstrated a 55% improvement over those of 2017.