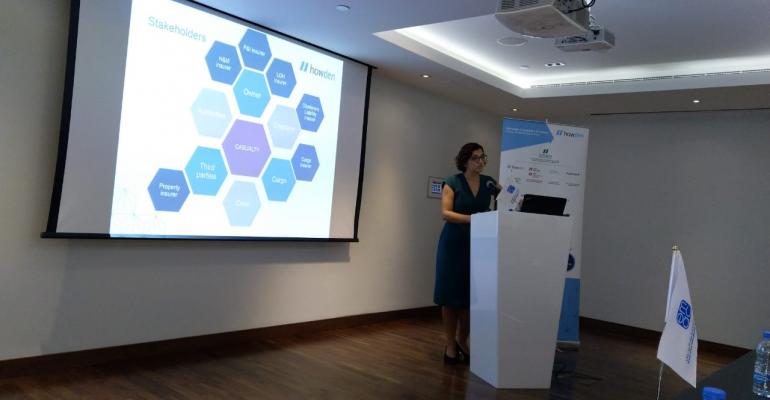 With the ever growing sizes of ships the nightmare of a $4bn casualty involving an ultra-large containership and cruise vessel was highlighted at breakfast seminar hosted by the Emirates Maritime Arbitration Centre (EMAC).

Speaking at the seminar were Bengi Yuceer, regional head of marine claims and Vivek Sharan, regional marine client director from Howden Insurance Brokers. They highlighted that while the number of losses continued to fall the use of ever larger vessels made incidents prone to bigger losses in terms of the financial impact.

However, they noted that the average container vessel carrying capacity had nearly doubled over the last decade with ships of over 23,000 teu now in service, and vessel size had increased by nearly 1,500% since 1968.

The Howden Insurance Brokers used the example of a worst case scenario where a large containership and a cruise vessel collided, then both grounded causing pollution in an environmental sensitive area. With both vessels then deemed to be total constructive losses the estimated total loss from the incident could come up to an estimated $4bn. “Marine Insurance, is one of the oldest forms of insurance. Insurance brokers are faced with a multitude of shipping claims on a daily basis, hence a talk of this nature is key to understanding operational risks and how to manage issues when they do arise, be it through insurance or dispute resolution. At EMAC it is our responsibility to provide a platform for informative industry discussion, opinions and knowledge building,” commented Majid Obaid bin Bashir, chairman and secretary general of EMAC.