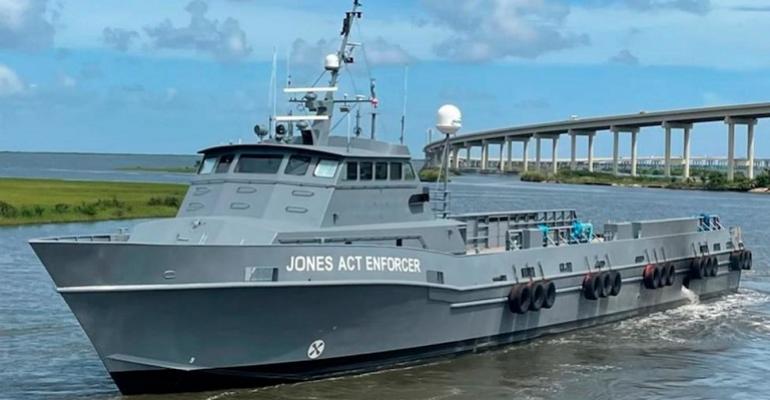 A trade association representing offshore vessel owners operating the Gulf of Mexico is taking the monitoring of the US Jones Act into its own hands with the Jones Act Enforcer.

The Jones Act specifies that movement of parts and equipment between US points and platforms and drill rigs must be done by nationally built, owned, and operated vessels. The Offshore Marine Service Association (OMSA) has taken a pro-active step- chartering a vessel, dubbed Jones Act Enforcer, that would monitor activity in the Gulf of Mexico, and, if warranted, would report out violations of the Jones Act.

“Reporting out”, in this context, means notifying the appropriate regulatory agencies - US Coast Guard (USCG) and US Customs and Border Protection CBP of non-compliance with the Jones Act, and also disseminating the news widely in mainstream news media.

Related: The Jones Act - legislative and regulatory influence on the offshore industry of America

OMSA has now issued its first report on a Jones Act violation, alleges that the vessel Epic Hedron - built in China and flagged in Vanuatu -  operated by a firm specializing in de-commissioning of offshore facilities, hauled oil platform jackets  in the Gulf of Mexico transporting merchandise within the US Outer Continental Shelf where Jones Act compliant vessels are required in most instances.

OMSA ‘s President, Aaron Smith, based in its New Orleans offices, has said in a release: “Vessels transporting cargo between US points must be built in the US. In this report, we’ve detailed how a company—by their own admission—used a Chinese-built vessel to transport cargo. That's illegal.”

In its complaint, sent to both the USCG and CBP, OMSA states: “The Offshore Marine Service Association (OMSA) is alleging and providing evidence that the Epic Hedron has violated the Jones Act as well as US Coast Guard (USCG) and international safety regulations. We respectfully request that these allegations be investigated and when proven true, the associated conclusions and penalties be publicly released and quickly applied.

“Moreover, we also request a change to USCG regulations to ensure that foreign-flagged vessels transporting heavy-lift loads be required to transmit their positions to surrounding vessels and other stakeholders.” The safety issues detailed include AIS equipment that was switched off.

These developments come at a time that installation work on offshore wind projects is anticipated, initially along the mid-Atlantic and New England coasts from North Carolina northward up to Massachusetts. Earlier this year, new legislation clarified that offshore wind service and supply vessels would be entitled to the same Jones Act protections as those serving oil and gas installations offshore.

In January, the US Congress agreed, on a bi-partisan basis, that 1950’s era rules - enacted in the nascent days of drilling for oil and gas in the Gulf of Mexico -  would also apply to offshore wind activities along the US Outer Continental Shelf.  Members of OMSA, which include approximately 60 operators of offshore vessels, with many decades of work in the oil patch, are keen to participate in work supporting turbine and electrical installations, initially, and then maintaining the turbines and electrical infrastructures.

Social media is playing an increasingly important role across all aspects of the maritime business, along with outreach to traditional media. OMSA notes, in its complaint: “OMSA generated the report after it received a tip from an industry stakeholder regarding the company’s social media accounts.”