FSRU sector on a roll as new projects ramp up 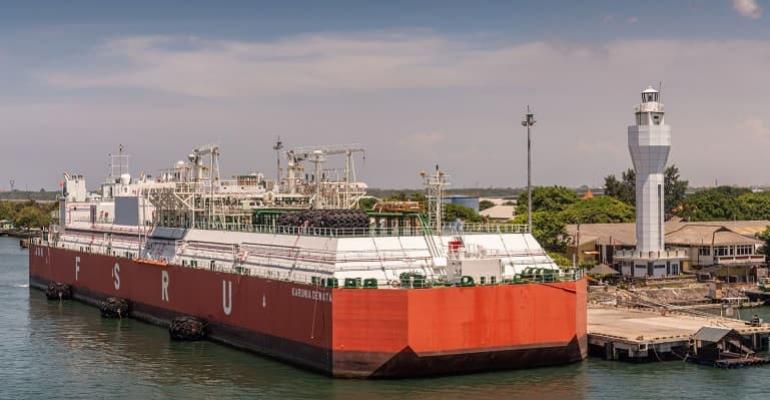 Demand for floating storage and regasification units (FSRU) is buoyant as the global LNG sector bounces back from last year’s temporary blip.

Greece’s Dynagas took delivery of the first Chinese-built FSRU, Transgas Power, in the middle of this month The 174,000 cu m unit was built at Hudong-Zhonghua Shipbuilding Group and is chartered to TotalEnergies.

Meanwhile, India received its first FSRU-based LNG reception terminal in April. The 170,000 cu m FSRU Hoegh Giant berthed at the Jaigarh terminal in Maharashtra and is now deployed on a ten-year charter to Indian power company, H-Energy. Expanding LNG power supplies is seen as an essential step as the energy-hungry country seeks to reduce its dependence on coal.

In China, conversion work on the 2002-built Galea, an LNG carrier originally built for Shell Singapore, is nearing completion at Cosco Shipping Heavy Industry in Shanghai. Later this year, the unit is due to berth adjacent to the LNG import terminal in Vassilikos, Cyprus, where it will be linked to the country’s energy grid until 2046.

In Australia, Melbourne-based Venice Energy and Greece’s GasLog recently signed a Heads of Agreement under which the Greek company will assist in procuring a 150,000 cu m FSRU for a new LNG import terminal planned for Adelaide.

Panayiotis Mitrou, Lloyd’s Register’s Global Gas Segment Manager, is upbeat about the future. In an interview earlier this year, he pointed to the abundance of gas and rapidly increasing volumes shipped by sea. The FSRU model, he said, is likely to be adopted in many regions which lack their own energy supplies and are therefore exposed to rising energy prices.

“All this gas needs to be channelled to markets,” he said. “And we see growing interest in many countries in using FSRUs for LNG imports … FSRUs provide a quick and cost-effective way of providing the infrastructure that is required. We see a substantial uptake in the FSRU sector.”