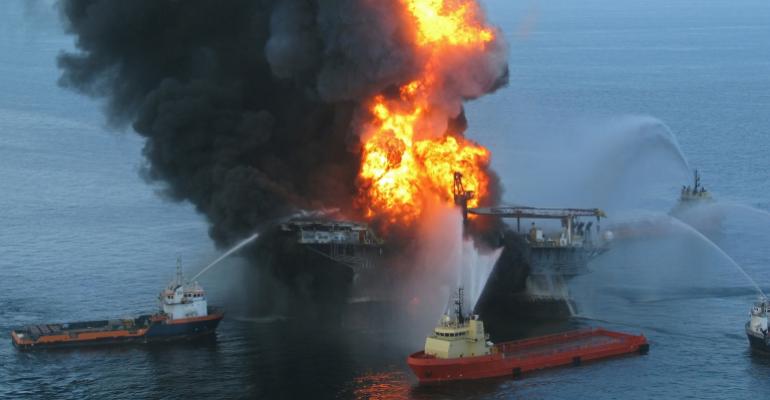 Deepwater Horizon on fire in 2010
In a surprising turn of events, President Donald Trump signed a Presidential order extending an existing oil drilling ban off the Florida Gulf coast, out 10 years, to 2032.

Additionally, he now ordered the ban to be extended to Florida’s Atlantic Coast, and to the neighboring states of Georgia, and – farther up the Atlantic coast, South Carolina.

There is some calculation here. Florida and Georgia, where many residents (especially in coastal areas) oppose offshore drilling, are considered “swing states” in the upcoming election. The beach areas are big tourist destinations, and memories of the Deepwater Horizon spill, now 10 years ago, are on the minds of coastal residents.

The Democratic presidential contender, Joe Biden, has made no secret of his position; in a tweet, Biden- an advocate of a greener energy agenda, said: "You don't have to guess where I stand: I oppose new offshore drilling."

But the ban also comes at a time of huge energy surpluses in the face of dramatically reduced demand- so that it has little or no negative impact on US efforts at “Energy Independence”, a key theme for Trump. As recently as late August, President Trump had directed the Department of the Interior to a review an Obama-era plan that restricted offshore leasing (in the Atlantic, but also on the West Coast and in Alaska).

Reactions from the industry were predictable. One trade group, the National Ocean Industries Association (NOIA) which represents nearly three dozen entities engaged involved in offshore energy exploration and production, along with service providers to them, issued a statement politely rebuking the Executive Order. They commented that: “experience in the Western and Central Gulf of Mexico shows how offshore production goes hand-in-hand with environmental stewardship, national defense and other industries, including fishing and tourism.”

The Association added that: “Our preference should always be to produce homegrown American energy…. Limiting access to our offshore energy resources only shortchanges America and dulls our national outlook.” The leadership ranks of NOIA have included executives from entities such as Seacor Marine, Bollinger Shipyards, and other well-known names.

A top executive from the American Petroleum Institute (API), likewise took a cautious tone, saying : "Banning federal leasing and development on federal lands and waters would derail decades of U.S. energy progress and return us to the days of relying on foreign energy sources hostile to American interests…”The API’s President, Mike Sommers, added: “This is ultimately a choice between American-made energy and foreign energy, a choice between American jobs and foreign jobs."

A podcast, sponsored by the oil giant Chevron, on the website Politico, suggested that even Trump insiders were surprised by the President’s actions here, saying “The Trump administration went into panic mode, regarding the campaign….we’ve got to do something- it’s costing us voters.”

Politico’s coverage injects a bit of irony, noting that: “By issuing a presidential memorandum to rescind Florida waters through the Outer Continental Shelf Lands Act, the Trump administration is using the same provision the Obama administration used to withdraw many Arctic areas.”