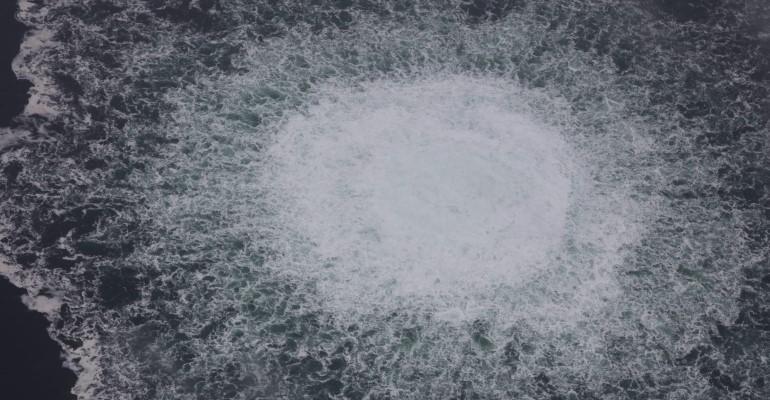 Nord Stream 1 spill photographed in September 2022.
A Blueye Robotics drone has revealed a vast length of underwater Nord Stream pipeline that could only have been caused by one or more massive underwater explosions, experts say.

No gas has been pumped through the pipeline since September 26, worsening Europe’s energy crisis as the cold months of winter approach.

Working with Swedish newspaper Expressen, the Norwegian robotics firm, Blueye Robotics, used an underwater drone to review damage to the Nord Stream 1 pipeline which, until recently, was a key supply line for Russian gas to Europe, 80m under the Baltic Sea.

The footage revealed a 50m length of pipeline that was either missing or buried in the seabed. Speaking to the newspaper, Trond Larsen, drone operator, declared: “It is only an extreme force that can bend metal that thick in the way that we are seeing.”

Although Russia has denied causing damage to the two Nord Stream pipelines, the second one of which had been primed to start pumping gas but has now not done so, the EU has previously accused Russia of using gas as a weapon in response to European support for Ukraine.

Three separate pipeline investigations are under way, conducted by Danish, German and Swedish authorities. A joint enquiry was ruled out on the grounds of national security interests. However, what is likely to have been sabotage of the pipeline has heightened fears of possible attacks on other vital subsea infrastructure.

Although no offshore support vessels (OSV) are thought yet to have been fixed, brokers are aware of a series of enquiries from oil companies and offshore asset owners relating to surveillance and infrastructure protection deployments.

These new employment opportunities come against a backdrop of firming OSV rates and an upturn in demand as Europe’s energy shortages become more severe.