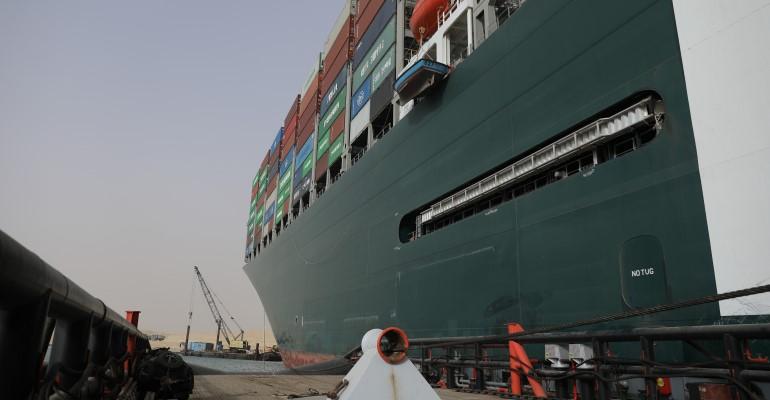 Negotiations continue between the Suez Canal administration and the various parties which represent the owners of the giant containership Ever Given, the ship and her cargo continue to broil in the growing summer heat of the waterway.

While the amount demanded by the waterway authority has been reduced by about one third, indicating some movement, it might be suggested that there is some distance to go, and one must hope that the crew of the arrested vessel don’t end up as the newest members of the Great Bitter Lakes’ Association. This it may be recalled is the society formed by the crews of the ships which spent many years in that location, when the canal was closed in the 1970s.

Nobody ought to be too judgemental in the absence of any coherent report of what caused the chartered Evergreen ship to run into the bank and cause mayhem to the smooth working of global logistics. But the action of detaining the ship against the payment of what was a staggering sum, will not have made the SCA many friends. This is, after all, a major customer of the waterway, responsible for a respectable slice of its income and this is arguably not the sort of action a customer ought to expect from its service provider, if custom is to be retained.

A large ship blocking the waterway in a length of the canal that has not been “double-tracked” is surely not an altogether unforeseen accident. And if indeed it was the weather – a combination of sandstorm and fierce gusts that blew the ship ashore, it is not unreasonable to suggest that the operational management of the waterway should have mitigated the risks, by postponing transits for large and vulnerable ships, or by requiring tugs to be used to aid steering. It is notable that other waterways, such as the St.Lawrence Seaway, will routinely require ships to tie up in dangerous cross-wind conditions.

The canal authorities have been at pains to point out that the master of a ship retains full responsibility for its conduct throughout the transit, the pilots merely supplying advice But in an exceedingly dynamic situation where the pilots are directly giving helm and engine movements on a second by second basis, it is facile to suggest that there is no shared responsibility. This is difficult and demanding ship-handling, requiring judgement and experience and not unreasonable to expect that the pilots will be suitably qualified.

But in the handling of big ships in demanding conditions, accidents occasionally happen and it is a time for being reasonable, not taking action that will make matters worse. There is a perfectly good international mechanism that would have seen the ship released, subsequent to any arguments about damages and liability. As it remains, there are hundreds of millions worth of cargo which is not getting to its destination and probably deteriorating. The consignees of all those container contents are customers too.

You struggle to discover precedents that have ended up in such a fashion. Accidents on the busy Kiel Canal are not unusual, but do not usually end up with ships being arrested, even  after locks have been damaged.

There was one memorable incident many years ago on the St.Lawrence Seaway, when a Manchester Liner’s ship failed to stop and rammed a lock gate causing the waterway to be shut for an extended period. It was caused by a tiny bolt in the controllable pitch propeller controls shearing at the crucial moment, which you could hardly blame on the master. And while the maximum amount of inconvenience was caused to all those ships unable to use the waterway, insurers paid for the dock damage, not loss of income from tolls, or consequential losses by other frustrated customers.

Everyone knew that when big ships move about in confined spaces, occasionally stuff happens.