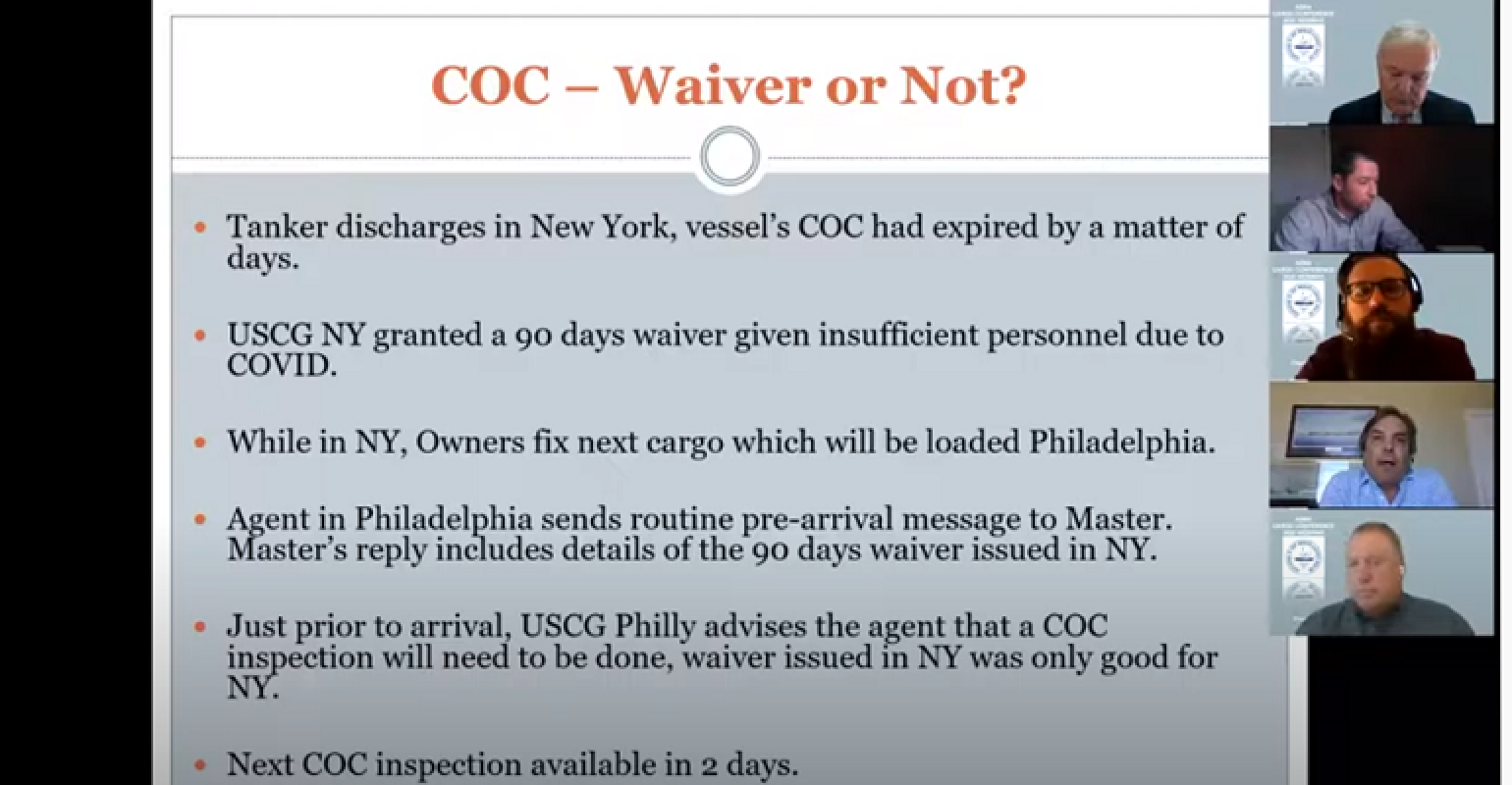 Certificate of compliance waiver or not – what would you do?

Shipping can throw some pretty difficult scenarios at the people who work in it, ever more so a year that has a global pandemic, and the virtual version of the US annual Association of Ship Brokers and Agents (ASBA) conference, role played pertinent dilemmas in tankers and dry bulk.

This virtual event dubbed “What would you do?” was moderated by maritime arbitration guru Keith Heard, a partner in the law firm Lennon, Murphy & Philiips and featured two separate sessions, one for dry bulk and the other for tankers,

In each the respective panels, composed of real-life representatives from cargo, shipowning, agency and brokerage, reacted to issues arising at loading or discharge.

The pandemic-related events of 2020 came to light starkly in the tanker panel dealing with the fine print and the finer points of port state vessel examinations by the US Coast Guard, was titled:  “Certificate of Compliance- Waiver or Not?”.

A tanker finishing up in New York is issued a 90-day waiver for a just expired COC by the local office of the Coast Guard. Upon transiting to its next port, Philadelphia, roughly a day away- the vessel owners are informed by the agent that the waiver is only good in New York, not in Philadelphia- where the vessel must wait several days for a COC inspection, as the Coast Guard is experiencing a manpower shortage due to COVID-19, before proceeding with cargo operations.

he agent, played by a long time ASBA member from one of the bigger East Coast agencies, can be heard furtively telling the charterer, “I am doing everything I can…” and then telling the owner “I don’t get it….I wish I could run to Washington, DC and scream and yell” Meanwhile, the charterer - getting frantic at this point - tells the broker to put the owners on notice.

At the end of this session, the majority of respondents to a second poll viewed the owners as being at fault- they should have known, or should have asked whether the COC was tied to a particular port.

The dry bulk panelists, assuming their real life roles, ie the “owner” was played by a rep from a top bulk owner, considered a scenario called “Statement of Incorrect Facts”, which dealt with confusion surrounding “Weather Working Days” in a charter party.

A ship due to load a non-weather sensitive cargo, in Argentina is delayed at its anchorage by a vessel at the berth, discharging fertilizer- which is sensitive to weather. When the dust settles, the owner claims $150,000 demurrage, citing rain delays, including while at anchor for 10 days, while the charterers are looking for dispatch of $12,000- having loaded the vessel quickly once the berth became available.

The Statement of Facts, prepared by the local agent, had been signed off on by the vessel’s Master without mention of rain times, under threat of detention, we learn as the panel unfolds.

In a Zoom poll at the conclusion of the case, the majority of listeners were siding with the vessel owner- and recommended that the owner work with the Master on presenting evidence that would reveal the true story.

Role playing, which is what ASBA offered here, lends itself very well to the world of virtual conference, bringing a bit of the real world to this newly emerging medium.

You can watch the full webinar below: